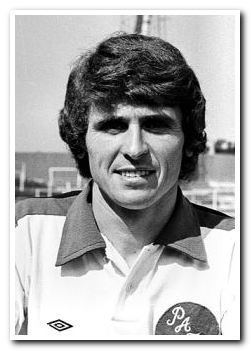 The Stockport-born left-back started his career in 1964 with Manchester City, but in two years with the Maine Road club failed to make the breakthrough to the first team. Leaving Manchester, Burrows signed for York City in June 1966 and became a virtual ever-present in his first four seasons at Bootham Crescent. He went on to make over 300 appearances in eight years, scoring 14 times as City rose from the fourth tier to the second. In July 1974 he was sold to Argyle for £16,000 and embarked on a similar run of reliability, becoming an ever-present over two seasons and playing a key role in Tony Waiters' 1974-75 promotion campaign. After his spell at Home Park he moved to Hereford United in August 1976, where he went on to make over 100 appearances. Whilst at Edgar Street he was loaned to Gillingham in the 1977-78 season, playing five times for the Kent club. Hereford proved to be his last League club but he later played for Witton Albion and Mossley.

Greens on Screen is run as a service to fellow supporters, in all good faith, without commercial or private gain.  I have no wish to abuse copyright regulations and apologise unreservedly if this occurs. If you own any of the material used on this site, and object to its inclusion, please get in touch using the 'Contact Us' button at the top of each page. Search facility powered by JRank Search Engine. Hover facility courtesy of Milonic. UK time at page load: 24 July 2021, 23:33.