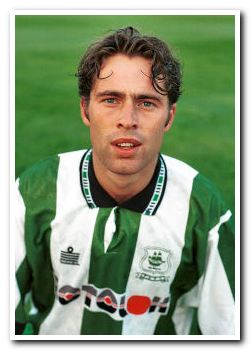 A cultured, on-the-deck footballer who could play in a variety of positions, Burnett started his career at Leyton Orient before being hoovered up by Kenny Dalgish's big-spending Blackburn Rovers in 1992. With Dalglish later looking for a discount on Argyle's valuation of defender Jock Morrison, Burnett was offered in part exchange and the pair swapped clubs in the summer of 1993.

A patient midfielder with an eye for a pass, Burnett made 34 league appearances as Argyle reached the playoffs in 1994. He scored twice, perhaps a poor return for such a clever player, though one of those did come in a famous 3-2 away win over Devon rivals Exeter City.

The following campaign was a disaster for the club, and Burnett's form in an injury-disrupted season suffered along with the team's overall. He was one of the few players to survive Neil Warnock's cull in the summer of 1995, but he was clearly too good a player for the basement division and Bolton Wanderers whisked him off to the Premier League two months into the season. He spent just one season in Lancashire before joining Huddersfield Town following a short loan spell. After two seasons and 47 appearances at the McAlpine, he joined Grimsby Town, where he enjoyed perhaps his best form since the 1993-94 season at Argyle.

In the 1997-98 campaign, Burnett scored the winning 'golden goal' against Bournemouth in the Football League Trophy final at Wembley, and also appeared in that season's third-tier playoff final at the old stadium, in which Grimsby clinched promotion. Burnett left Grimsby in 2002 and had spells at Woking, Grays, Fisher and Peterborough, before going on to manage Fisher, Dulwich Hamlet and Grays.

Greens on Screen is run as a service to fellow supporters, in all good faith, without commercial or private gain.  I have no wish to abuse copyright regulations and apologise unreservedly if this occurs. If you own any of the material used on this site, and object to its inclusion, please get in touch using the 'Contact Us' button at the top of each page. Search facility powered by JRank Search Engine. Hover facility courtesy of Milonic. UK time at page load: 27 October 2021, 23:14.