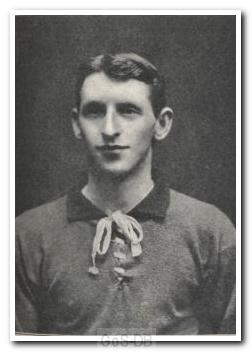 Note: Burch's number of goals is one less than in some publications. That's because of the match at home to Watford on 16 Dec 1911. Some books show the goalscorers as Raymond, Boden (2) and Burch (2) but contemporary newspapers show the 4th goal was scored by Boden not Burch, with Boden therefore getting a hat-trick.

Burch, born in Plymouth in 1886, played for St Budeaux and Essa before joining Argyle in 1904. Primarily an outside-right, he could play in a number of forward positions and was described as being "always a trier" by the Argyle handbook.

Burch made just one appearance in his first two seasons with the club but gradually forced his way into the side, becoming a regular member of the team towards the end of the 1906/07 season. After losing his place at the end of the following campaign however, he moved on to Reading and spent a single season there before returning to Home Park. From 1909 to 1915 he was a consistent and highly valued member of the Argyle first team and his career peaked in 1912/13 when his 30 goals in 37 appearances made him the top scorer in the Southern League.

The outbreak of war interrupted Burch's career but he was still on Argyle's books when hostilities ceased. However he made no more appearances for the club before joining Swansea Town in 1919.

Greens on Screen is run as a service to fellow supporters, in all good faith, without commercial or private gain.  I have no wish to abuse copyright regulations and apologise unreservedly if this occurs. If you own any of the material used on this site, and object to its inclusion, please get in touch using the 'Contact Us' button at the top of each page. Search facility powered by JRank Search Engine. Hover facility courtesy of Milonic. UK time at page load: 08 December 2021, 16:18.