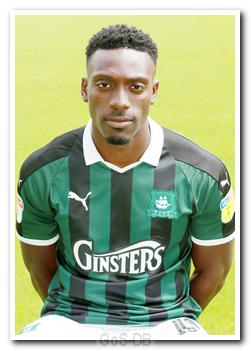 Born in Romford, Ladapo began his career with Colchester United's Academy, where he also had work experience spells with Thurrock, Chelmsford City and Bishop's Stortford. He signed professional terms with Colchester in March 2012 and made his League debut nine months later.

It was in Kent that he really impressed, scoring 23 goals in 49 appearances as Margate won promotion from the Isthmian Premier League, which was enough to earn him a dream move to Crystal Palace and the Premier League in March 2016. He made only two appearances for Palace; his debut was at Old Trafford where he came on as a substitute as the Eagles lost 4-0. Whilst at Palace he was loaned to Oldham Athletic (22 & 3) and Shrewsbury Town (15 & 4).

Greens on Screen is run as a service to fellow supporters, in all good faith, without commercial or private gain.  I have no wish to abuse copyright regulations and apologise unreservedly if this occurs. If you own any of the material used on this site, and object to its inclusion, please get in touch using the 'Contact Us' button at the top of each page. Search facility powered by JRank Search Engine. Hover facility courtesy of Milonic. UK time at page load: 03 December 2021, 12:29.