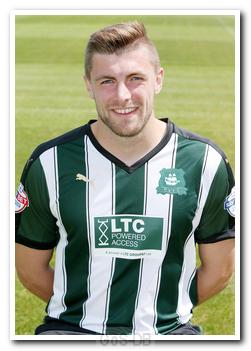 Born in Birmingham, Brunt began his career with Bristol City's youth team before joining Stoke City's academy in 2010. His career started well in the Potteries, including a reserve-team hat-trick against Walsall, but his progress was curtailed by a serious anterior cruciate ligament injury that kept him on the sidelines for most of the 2010-11 season.

As part of his recovery, the 6' 1" forward was loaned to Northern Premier League side Nantwich Town in November 2011, where he made just a single appearance against MK Dons in the FA Cup. After playing in a Stoke reserve match whilst still on loan at Nantwich, Brunt scored in front of watching Luton Town manager Gary Brabin. As a result, his loan spell at Nantwich was cut short to allow him to move on loan to the then Conference Premier side in November 2011, where he made six appearances without scoring before returning to Stoke after a loan extension could not be agreed.

January 2012 saw a loan to Tranmere Rovers, where he made his Football League debut in a two-month stay that included one goal in 15 appearances. In July 2012 he joined Leyton Orient on a six-month loan deal, playing 22 matches and scoring three goals before returning to Stoke, only to be released at the end of the season.

In January 2013 Brunt signed a two-and-half year contract with Bristol Rovers. In his time at the Memorial Ground he played 31 times and scored five goals whilst a Football League side, but his second season was curtailed by another knee injury in November 2013, which kept him out of the side that was relegated from the Football League. Brunt played a further seven times for Rovers in the 2014-15 season, the Bristol club's first as a Conference Premier side, and was also loaned to two Football League Two sides: York City (6 appearances, no goals) and Stevenage (5 appearances, 0 goals).

With six months remaining on his contract and his salary a burden, Brunt's time at Bristol Rovers was ended by mutual consent after he returned from Stevenage in January 2015, allowing Argyle - his third League Two club of the season - to step in to secure an 18-month deal, despite Stevenage's desire to attract the striker back on a permanent contract.

Brunt grew in stature during Argyle's promotion challenge in 2015-16, often ploughing a lone furrow as a hold-up forward. His hard-work was rewarded with a rich vein of scoring form which saw him net 8 goals in 15 games from October. However, Brunt's season ended suddenly in Argyle's ignominious defeat at Barnet at the start of March when his leg collapsed following a challenge. This was a game in which Jordon Forster was also stretchered off, just before Brunt, with a head injury and the two incidents resulted in a remarkable 14 minutes of added time at the end of the first half.

A few days later it was revealed the Brunt had damaged anterior cruciate and medial ligaments, and after surgery was expected to be out for the rest of 2016, at least. Despite the seriousness of his injury, he was offered a new one-year contract at the end of the season, which he accepted.

Sadly, 14 months after sustaining the damage and despite a period of rehabilitation in the USA, Brunt was unable to regain full fitness and in May 2017 found himself on Argyle's released list. Although he was offered the chance to train with the newly-promoted Pilgrims that summer, without the security of a contract he reluctantly decided to seek his future elsewhere.

In August 2017 he signed for Exeter City, following a successful pre-season trial.

Greens on Screen is run as a service to fellow supporters, in all good faith, without commercial or private gain.  I have no wish to abuse copyright regulations and apologise unreservedly if this occurs. If you own any of the material used on this site, and object to its inclusion, please get in touch using the 'Contact Us' button at the top of each page. Search facility powered by JRank Search Engine. Hover facility courtesy of Milonic. UK time at page load: 23 May 2022, 01:01.