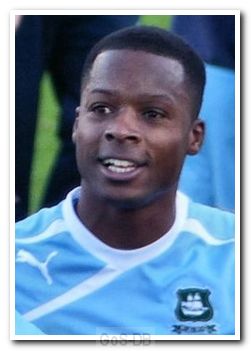 Came from: Chesterfield   Went to: Released

Born in Levenshulme in Manchester, Trotman was a product of Burnley's youth system but was released at the age of 18. In 2006 the central defender was signed by Oldham Athletic and during his first season was sent out on loan to Conference side Halifax Town to gain experience. Having played 11 times, scoring twice, he returned to Boundary Park and started the following campaign in the Latics' first team, impressing manager and fans alike. Trotman had by then played 18 times and scored once for Oldham, and it was at this time that he first appeared on the Home Park radar when he become the subject of a reported £250,000 bid by Paul Sturrock whilst Argyle were a Championship side. However, the club was outbid by Preston North End, whose deal was closer to £500,000 with add-ons.

The move to Deepdale was not, however, a resounding success. Limited opportunities, coupled with an unusual spell of managerial changes, saw him play just three times in three years for the Lancashire side, during which time he was loaned to Colchester United in 2009 (6 league games), Southampton in 2009-10 (18 games and 2 goals), Huddersfield Town in 2010 (21 games, 2 goals) and finally back on loan to Oldham Athletic (17 games). Released by Preston at the end of the 2010-11 season, Trotman signed for Rochdale and played 12 times before joining Chesterfield on loan in the November. Two months later the deal was made permanent and he was appointed captain by John Sheridan, for whom he had played at Oldham. He went on to make 58 appearances and score once for the Spireites, but, with Sheridan no longer at the club, Trotman was one of seven players to be released by Chesterfield at the end of the 2012-13 season.

After nearly signing for SPL sides Dundee United and Partick Thistle in the close season, Trotman moved to Argyle on a short-term contract until January 2014, signing for the club at the second time of asking and re-uniting with John Sheridan for the third time in his career. This followed Paul Wotton's rib injury, sustained in the 2013-14 season's opening-day defeat at Southend United, which, coupled with an injury to Guy Branston and a suspension for Maxime Blanchard, left Argyle short of defensive cover. Playing regularly throughout the 2013-14 season, Trotman's injury-time winning goal at Mansfield in October arguably turned Argyle's season around, yet a red card in a miserable 4-0 home defeat by York City summed up the extremes of his season. At the end of the campaign, he was released by John Sheridan and he signed a short-term contract with new Conference Premier side Bristol Rovers.

Trotman played 19 times for Rovers, helping them to return to the Football League after their only Conference season. He was released at the end of that 2014-15 season and subsequently retired from football, aged 28, due to injury problems.

Greens on Screen is run as a service to fellow supporters, in all good faith, without commercial or private gain.  I have no wish to abuse copyright regulations and apologise unreservedly if this occurs. If you own any of the material used on this site, and object to its inclusion, please get in touch using the 'Contact Us' button at the top of each page. Search facility powered by JRank Search Engine. Hover facility courtesy of Milonic. UK time at page load: 07 May 2021, 21:12.