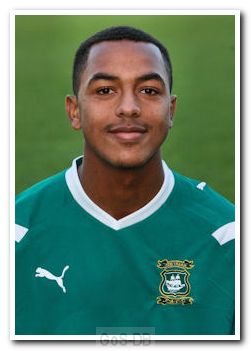 Hemmings joined Argyle on an initial short-term loan deal from Wolverhampton Wanderers. A product of the Molineux academy, he had been with the Wolves since the age of nine and was a former England youth international who could play up front or on the wing. Shortly after signing his first professional contract in February 2009, he had a loan spell with Cheltenham Town and his Wolves first team debut followed later that season. The 2009-10 campaign saw Hemmings hampered by injury and he was limited to reserve team action, but in October 2010 he spent three months on loan at Torquay United, after which he was given a contract extension by Wolves.

Hemmings scored against Northampton Town on his Argyle debut and some impressive performances led to his loan spell being extended until the end of the 2011-12 campaign. On returning to Molineux he was not offered a new contract and joined League One Walsall in July 2012. He immediately became a regular member of the Saddlers' first team and again scored on his debut, against Brentford.

In March 2014 he went on loan for a month to Burton Albion, a deal which was extended as the Brewers successfully pushed for the play-offs. He wasnt offered a deal as the Brewers failed to win promotion and after being released by Walsall, he signed for League Two side Dagenham & Redbridge on a one-year contract. After a successful 2014-15 season, Hemmings was rewarded with a further year's contract but was unable to save the Daggers from the drop out of the Football League. He left the club in June 2016, having scored 12 goals in 91 appearances.

His next move was to Nottinghamshire to sign for Mansfield Town on a free transfer in June 2016. Hemmings made a total of 22 appearances in the 2016-17 season, scoring 2 goals, before being released at the end of the campaign by Stags' manager, Steve Evans.

In June 2017, Hemmings signed a one year contract with Boston United (also known as The Pilgrims) in the Vanarama National League North (the 6th tier of English football).

A little hit-and-miss for me - one of our better players at a difficult time for the club. His goal on Boxing Day 2011 to complete a two-goal comeback against Bristol Rovers at the Memorial Ground (the second time we had come back from 2-0 down at their place in a year!) will live long in the memory for any Argyle fan and remains one of the high points in the short time I've supported the club.

Greens on Screen is run as a service to fellow supporters, in all good faith, without commercial or private gain.  I have no wish to abuse copyright regulations and apologise unreservedly if this occurs. If you own any of the material used on this site, and object to its inclusion, please get in touch using the 'Contact Us' button at the top of each page. Search facility powered by JRank Search Engine. Hover facility courtesy of Milonic. UK time at page load: 07 May 2021, 07:41.