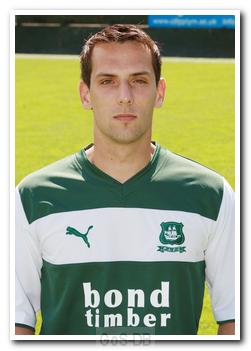 Blanchard began his career in his native France with Stade Lavallois Mayenne. He progressed through the youth ranks to the first team and made 26 appearances during his time with the club. He then spent the 2008-09 season with L'Entente Sannois Saint-Gratien and the next campaign at Moulins, playing 35 games for each club.

In August 2010 he joined Tranmere Rovers, making his debut a week later against Huddersfield Town. A versatile performer who could play at centre-back or in midfield, he went on to make 24 appearances for Rovers during his single season there. As a free agent who had been without a club for six months at the time, he joined Argyle on trial and sufficiently impressed Carl Fletcher to earn a short-term contract, which was later extended to the end of the 2011-12 campaign.

After making his debut against Northampton Town in late November, Blanchard was ever-present for the remainder of the season, his centre-back pairing with Darren Purse playing a huge part in keeping Argyle in the Football League. He signed a two-year contract extension just before the end of the campaign and was voted Argyle's Player of the Season for 2011-12.

Blanchard went on to play over a century of games for the club and weighed in with four goals, including a memorable first - a last-minute scissor-kick to salvage a home draw with Crawley Town in January 2012. However, he was one of seven players released by the club during a major squad shake-up by John Sheridan in May 2014, along with Luke Young and Jake Cole.

He spent a large part of the 2014-15 season without a club, as he did after leaving Tranmere and before arriving at Home Park. Returning to France he trained alone to keep his fitness levels up and his dedication paid off when he finally signed for League of Ireland Shamrock Rovers after impressing in three warm-up games ahead of their 2015 Premier Division campaign.

After four goals in 34 appearances for Shamrock Rovers, Blanchard was released from his contract in July 2016. There followed a strange episode at Newport County in League Two. The 30-year-old signed as a free agent on a game by game basis on 10th February 2017, played one match that night and four days later it was announced that he had left the club.

Greens on Screen is run as a service to fellow supporters, in all good faith, without commercial or private gain.  I have no wish to abuse copyright regulations and apologise unreservedly if this occurs. If you own any of the material used on this site, and object to its inclusion, please get in touch using the 'Contact Us' button at the top of each page. Search facility powered by JRank Search Engine. Hover facility courtesy of Milonic. UK time at page load: 07 May 2021, 19:50.