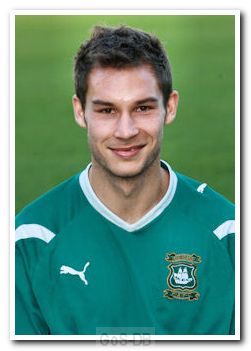 Atkinson, a left-sided midfielder, joined Argyle on loan from Hull City. He began his career as a trainee at the KC Stadium, graduating from the Tigers' Centre of Excellence to sign a professional contract in December 2006. The following year he had a short loan spell with Port Vale before returning to Hull, where he made his debut as a substitute against Argyle in the FA Cup. In January 2008 he moved on loan to Mansfield Town and made 12 appearances during a two-month stay with the club. In 2008-09 he failed to make any first team appearances for Hull in their first season in the Premier League, but did sign a one-year contract extension at the end of the campaign.

At the start of the next season, Atkinson played for Hull in a League Cup tie against Southend United before joining Rochdale on loan. He scored three times in 15 appearances, helping Rochdale win automatic promotion to League One. On returning to Hull, just before the end of the season, he played in the last two Premier League games of the campaign, against Wigan Athletic and Liverpool, scoring in the first.

At the beginning of 2010-11 he played four times for Hull before three games in a six-week spell at Rotherham United. He then re-joined Rochdale on loan in January 2011, where he spent the remainder of the season.

Atkinson joined Argyle early in the 2011-12 campaign, initially on a season-long loan, and was a virtual ever-present before being recalled by new Hull manager Nick Barmby in January 2012 and then sent to Bradford City until the end of the season. That summer he signed a one-year contract at Valley Parade, so ending over five years as a professional on Hull's books, during which he was loaned out seven times and made only eight appearances for his parent club.

Now a fully-fledged Bradford player, Atkinson clocked up an impressive 57 games for the West Yorkshire club in the 2012-13 campaign, as well as his 12 when on loan, and helped the Bantams to the 2013 League Cup Final at Wembley after playing in every round, including wins against Premier League sides Wigan Athletic, Arsenal and Aston Villa. Sadly the final ended in disappointment for the fourth-tier side: a 5-0 defeat by Swansea City. But that wasn't his only appearance at Wembley that season: he also helped Bradford win the League Two play-off final, having shared a bench place for the first 78 minutes with future Pilgrim Carl McHugh.

In July 2013 Atkinson signed a two-year contract with Southend United to reunite with former Hull City manager Phil Brown. He went on to be a regular choice for the Shrimpers in the 201314 season, helping them to grab a play-off spot and then repeat the feat the following season when United went one step further, winning the play-off final to secure promotion to League One.

In May 2017, after 171 appearances for Southend, Atkinson chose to drop a division and signed for League Two's Mansfield Town.

Greens on Screen is run as a service to fellow supporters, in all good faith, without commercial or private gain.  I have no wish to abuse copyright regulations and apologise unreservedly if this occurs. If you own any of the material used on this site, and object to its inclusion, please get in touch using the 'Contact Us' button at the top of each page. Search facility powered by JRank Search Engine. Hover facility courtesy of Milonic. UK time at page load: 27 October 2021, 22:46.