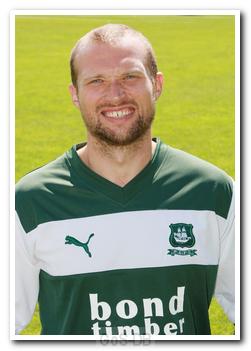 Feeney began his career with the St Andrew's club in his native Belfast, where he established an impressive goalscoring reputation. In 1998 he moved to Leeds United as a trainee but could not break into the first team. He joined Bournemouth in 2001, initially on loan, and scored 36 goals in 120 appearances in just over three years there.

Moving on to Stockport County before the 2004-05 season, he scored 17 times in just over 30 appearances, but could not help the club avoid relegation. Shortly before the end of the campaign he moved to Luton Town for a fee of £150,000, and spent two seasons there, struggling to hold down a regular first team place and scoring just 8 times in 77 games.

A Northern Ireland international, whose grandfather and father also gained international caps, Feeney moved on loan to Cardiff City in March 2007, a move made permanent at the end of the campaign. However, just weeks into his Cardiff career he was sent to Swansea City on a four-month loan. After 6 goals in just 12 games for the Swans a transfer was on the cards, but an injury suffered towards the end of the loan spell ended those talks. Back at Cardiff he made a brief comeback before another injury ended his season.

At the start of the 2008-09 campaign he moved to Dundee United on a season-long loan but, despite an impressive start, he struggled to find the net and again missed time due to injury. In July 2009 a potential return to Leeds United fell through after Feeney failed a medical, and he subsequently required hip surgery. It was 3 months before he returned to action, and after a few appearances for Cardiff he was loaned to Sheffield Wednesday. A change of management at Wednesday saw him return to Cardiff after just a month and a single first team appearance.

Feeney was released by Cardiff at the end of his contract and in July 2010 signed for Oldham Athletic. He scored just once in 24 games in his time there and agreed a contract settlement with the club which allowed him to join Argyle on a free transfer. Despite regular appearances throughout the first half of 2011-12, Feeney struggled to find the back of the net and found his first team chances more limited as the season progressed. However, he signed a twelve-month contract extension at the end of the campaign. He managed three more goals in a further 22 games, including a penalty brace in a 3-2 comeback win at Morecambe, before a knee injury sustained in the return home fixture kept him out for the rest of the season.

Feeney was released by the club at the end of the 2012-13 season, but mindful of not having had the chance to give him a full assessment because of the injury, John Sheridan invited him to return on trial. Despite scoring the winner in a 1-0 pre-season win at Tiverton Town, with the manager pursuing other targets, Feeney elected to leave the club when he was offered the role of player and assistant-manager at Conference Premier side, Salisbury City, for whom he signed in July 2013. In April 2014, after 15 appearances for The Whites, without scoring, Feeney was announced as manager of Northern Irish League side Linfield. Whilst he had never played for Linfield, he was a life-long supporter of the club and his father, Warren Feeney Sr, played for them in the 1960s, 70s and 80s in two different spells. Whilst manager of Linfield, Feeney Jr donned his boots eight times and scored once, and also borrowed Jamie Richards from Argyle and played him in the club's 201415 UEFA Europa League campaign.

In October 2015 Feeney was appointed as assistant to former Argyle manager John Sheridan at Newport County. However, with Sheridan returning to his native North West to manage Oldham Athletic after just three months at Rodney Parade, Feeney was named as manager of County until the end of the 2015-16 season. After a poor start to the 2016-17 campaign, he was sacked that September.

In May 2017 Feeney was announced as the new assistant coach at Crawley Town under new manager Harry Kewell.

Greens on Screen is run as a service to fellow supporters, in all good faith, without commercial or private gain.  I have no wish to abuse copyright regulations and apologise unreservedly if this occurs. If you own any of the material used on this site, and object to its inclusion, please get in touch using the 'Contact Us' button at the top of each page. Search facility powered by JRank Search Engine. Hover facility courtesy of Milonic. UK time at page load: 13 August 2022, 06:23.