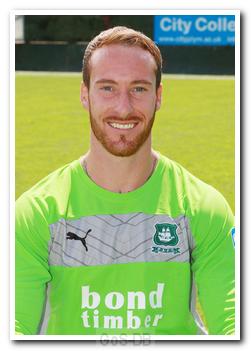 Came from: Barnet   Went to: Released

Cole started his career with Queens Park Rangers and spent six years with the club, only occasionally playing for the first team. During his first two years at Loftus Road he had loan spells with Hayes, AFC Wimbledon and Farnborough Town. In 2006-07 he enjoyed a short spell in the first team but at the start of the following campaign was again only able to secure a place on the bench. However, he earned praise from manager John Gregory for his professional approach and attitude. When, in the summer of 2008, he slipped further down the pecking order, Cole joined Oxford United on a three month loan deal, and followed that with a temporary move to Barnet in March 2009.

He was released by QPR in May 2009 and soon joined Barnet on a permanent basis. Cole was voted the supporters' player of the year in his first season at Underhill and made almost one hundred appearances between the sticks in just over two years with the club. After being released at the end of the 2010-11 campaign he spent time on trial with Gillingham before joining Argyle for pre-season training, where he impressed enough to earn a two-year deal. After sharing the goalkeeping duties for the first few weeks of the 2011-12 season, Cole took over on a permanent basis as Romain Larrieu focused on his new assistant manager role. He put in a series of superb performances and played a huge part in the successful fight for Football League survival.

During his second season at Home Park, Cole was given a chance in cup games but could not dislodge the returning Luke McCormick. McCormick's broken finger gave Cole his opportunity in the remaining 19 games of the 2013-14 league campaign, but despite solid performances, it was not enough to earn a contract extension and he was released in John Sheridan's cull at the end of the season. Perhaps Cole's departure was inevitable (arguably he was too good to be an understudy) but, somewhat surprisingly, his next club was a step-down when he signed for Conference National side Woking.

He spent the next two seasons at Woking, amassing a total of 64 appearances before a move in June 2016 to Aldershot Town. The Shots manager, Gary Waddock, had previously worked with Cole in the QPR academy.

Greens on Screen is run as a service to fellow supporters, in all good faith, without commercial or private gain.  I have no wish to abuse copyright regulations and apologise unreservedly if this occurs. If you own any of the material used on this site, and object to its inclusion, please get in touch using the 'Contact Us' button at the top of each page. Search facility powered by JRank Search Engine. Hover facility courtesy of Milonic. UK time at page load: 07 May 2021, 19:21.