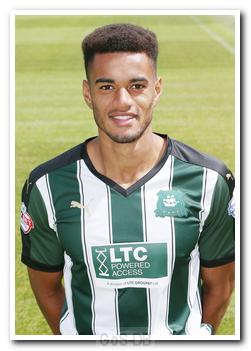 Born in Newcastle-under-Lyme, Nelson spent seven years with his local club Stoke City before being released in February 2009. Soon after he joined Argyle as an apprentice and impressed in his appearances for the youth team and reserves at both centre-back and in midfield. After catching the eye of Peter Reid in pre-season training, he made his debut in the League Cup tie against Notts County early in the 2010-11 campaign and then his Football League debut against the same side two months later.

One of the few success stories of a terrible season, he went on to play in every game for the remainder of the campaign after his League debut and was named the Young Player of the Season. In April 2011 he was called up for the England under-18 side and made his debut against Italy. Nelson continued in the same vein at the beginning of 2011-12 before a knee injury saw him lose his place halfway through the season. However, he was rewarded with a contract extension before the end of the campaign.

Having established a regular place under three successive managers during turbulent times at Home Park, with the club fighting for its Football League survival, Nelson rapidly totted up over a century of appearances and in April 2013 was awarded the captain's armband for two matches, becoming the youngest skipper since Norman Piper in 1967. Still only 20, his consistency was rewarded with the 2013-14 Young Player of the Year trophy and at the end of the season he signed another two-year contract extension.

Nelson was formally awarded the captain's armband in the summer of 2014, having agreed a new two-year contract. This was after Conor Hourihane's departure to Barnsley, with Nelson named as team captain and Luke McCormick given the wider role of club captain. With Nelson in charge on the pitch and a near ever-present at the heart of the defence, Argyle reached the play-offs in each of the next two seasons. In February 2016, whilst still only 22, he played his 200th Football League games for the club, a landmark that he reached seven months in age earlier than the all-time appearance record holder, Kevin Hodges.

But unlike Hodges, Nelson did not see his long-term future at Home Park. He led out the Pilgrims at Wembley for the 2016 League Two play-off final but this proved to be his last game. Although offered a new contract, he decided that it was time for pastures new. A compensation offer from Barnsley was rejected by Argyle, and instead Nelson chose a two-year deal with Oxford United, with compensation settled by tribunal.

Greens on Screen is run as a service to fellow supporters, in all good faith, without commercial or private gain.  I have no wish to abuse copyright regulations and apologise unreservedly if this occurs. If you own any of the material used on this site, and object to its inclusion, please get in touch using the 'Contact Us' button at the top of each page. Search facility powered by JRank Search Engine. Hover facility courtesy of Milonic. UK time at page load: 04 July 2022, 10:57.