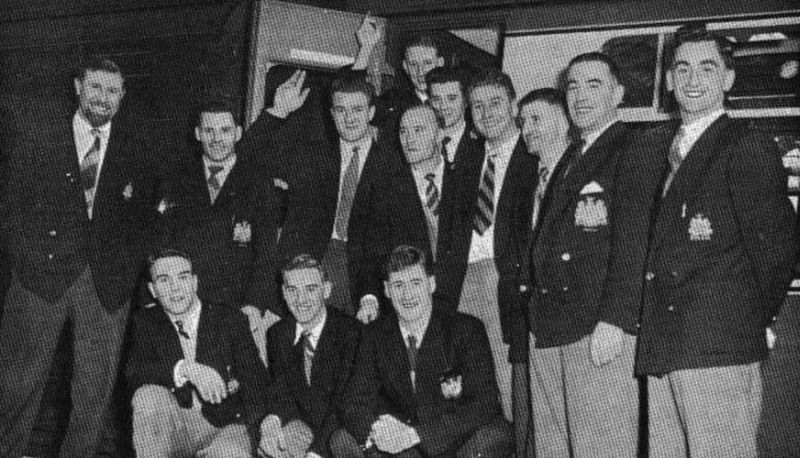 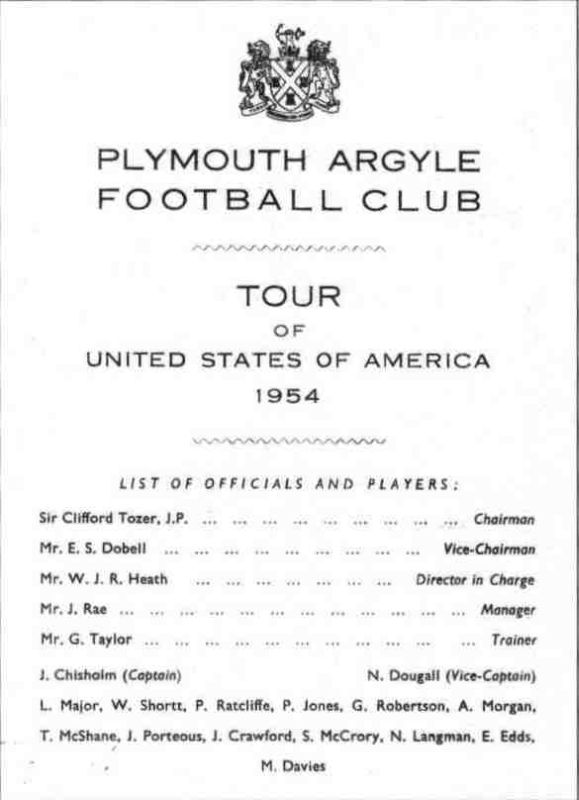 Long before it was announced that a Plymouth Argyle team would be visiting America again in 1954, overseas tours by Football League clubs had become almost a regular close-season feature. Charlton Athletic in 1937, Liverpool and Glasgow Rangers in post-war years, had included matches in New York and Detroit during Canadian tours; but a complete middle-west and coast-to-coast soccer tour of the United States, where the game has a long way to go before it reaches Continental or Latin American standards of play or enthusiasm, seemed a risky undertaking. It proved to be a successful one.

Touring abroad in these days of speedy and safe air travel made it possible for the Plymouth Argyle team of 1954 to visit the States of New York, Illinois, Missouri, Colorado, California, Michigan and Pennsylvania to carry out the arranged programme of ten matches in twenty-five days; and in contrast to the Argyle tour of 1924, supporters at home were kept well informed not only of the playing results, but had an almost day-by-day account of the players' experiences during the tour, through the excellent all round coverage of this U.S.A. visit by local sports writers. 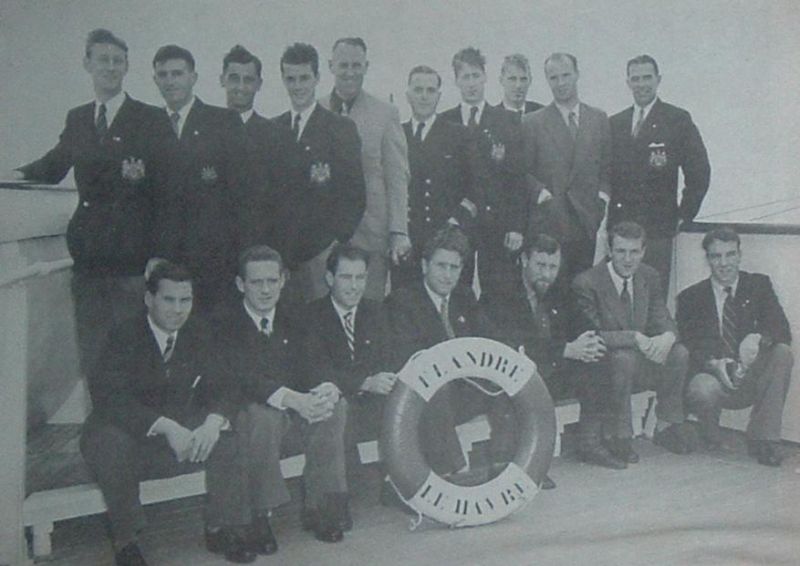 Onboard the SS Flandre


For the record, of the ten games played in the States, Argyle won 8 and lost 2, with a goal scoring record of 48 goals for and 19 against. More concise details, compiled by manager Jimmy Rae, as a permanent record of the tour, show that Plymouth Argyle had little difficulty in defeating the American All-Star teams, but lost both encounters with the West German champions, Borussia of Dortmund, who were also on tour of the U.S.A. At Soldiers Field, Chicago, before a crowd of 12,000 in a floodlit match, Borussia beat Argyle by four goals to nil; and at the Wrigley Baseball Stadium, Los Angeles, where many Hollywood film stars were amongst the 15,000 spectators, Argyle were beaten by 3-1.

A whirlwind sight-seeing trip to the U.S.A., which takes in New York, Chicago, St Louis, Denver, Los Angeles, San Francisco, Detroit, Philadelphia and a passing glimpse of Kansas City and Las Vegas, is something to remember according to any standards; add to it civic receptions, banquets, radio and T.V appearances, entertainments and overwhelming hospitality everywhere before and after playing football, it can become an exhausting experience.

Off-record items we heard about. At San Francisco, Pat Jones received abdominal injuries which kept him out of the side for the remainder of the tour......At Chicago, Bill Shortt is urgently required by Chelsea who were then in New York......At Detroit, Sir Clifford Tozer, the Argyle chairman, joined the tour on the termination of his office of Lord Mayor of Plymouth.......At Hollywood, the Argyle players are taken over the Paramount Film studios amd meet some of the stars.....At Chicago, Eugene Melaniphy and Jimmy Cook, former Argyle players who are still remembered at Home Park, are amongst the 'exiles' who meet the team.......At Detroit, a tour of the Plymouth Motor Works arranged for the Argyle party.......Between Chicago and Detroit, the party has a terrifying flight through an electric storm....all this and souvenirs too, make the tour memorable.

To see the Statue of Liberty and that amazing Manhattan skyline receding into the horizon from a homeward bound liner is always a nostalgic experience; and even the sight of Plymouth Hoe after a rough Atlantic crossing on the S.S.Flandre may not have entirely dimmed the vision of this, of San Franciscos Golden Gate, the bright lights of Times Square and all that, for the team that toured America. Academically, the U.S.A. tour could teach Argyle nothing in the arts of the football game, but as a result of it, if we are to see the Borussia club of Dortmund and Chelsea at Home Park in floodlit matches this season, it will have been worthwhile. But, more than this, the goodwill and the friends that this 1954 team has left behind in the States has enhanced the reputation of Plymouth Argyle everywhere overseas, and has shown themselves to be not only good sportsmen, but very good ambassadors. 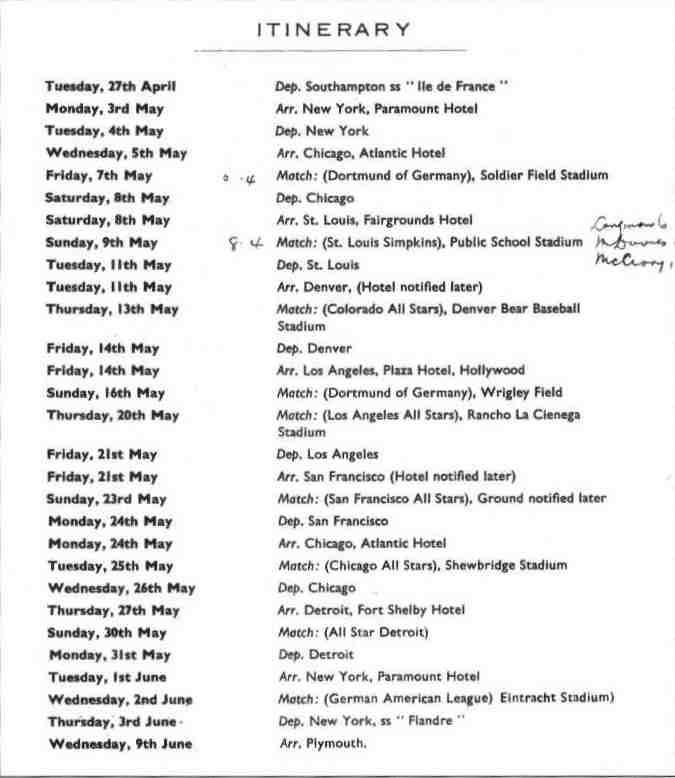 WHEN WE 'EDUCATED' THE AMERICANS ABOUT WIFE-BEATING!

During the tour, goalkeeper Bill Shortt, who is now mine host at the Golden Hind, was loaned to Chelsea who were also on a tour of the United States. The local columnist in San Francisco, Will Connolly, wrote in glowing terms about the Argyle 'kickballers' and took a real fancy to 'Jumbo' Chisholm and Paddy Ratcliffe, Argyles right back who had been a tail gunner in the R.A.F. and ended up in a German stalag.

Tony McShane was with the Argyle team and he seems to have done a bit of leg-pulling at the expense of the Yanks. This is what he told them: "When we lose people go home and beat the wife. Gloom settles over the town". Now I know that Argyle fans have always taken their soccer very seriously but I can't believe it went that far! At least the bit about gloom settling over Plymouth when things go wrong with the team is still true to a degree, although with TV and Match of the Day available it isn't any longer quite the end of the world for most fans. Mind you, still pretty bad though!

But back to wife-beating, even if it happened in 'they day' the male fan wouldn't get away with it nowadays. It would more likely be a case of the lady of the house beating up the old man from what I have heard recently from officials of the social services! It makes me wonder whether Tony McShane with his frightening picture of wife-beating at the end of a soccer match didn't arrest the progress of the game in the U.S.A. For it is well known that women dominate America.

It was quite a job preparing for that six-week tour. Each player took two pairs of boots, one leather and one rubber for use on hard, dry grounds, and two sets of jerseys and shorts. Sufficient spare studs, a shoemakers hammer, a file, half a gallon of olive oil to keep limbs supple - and so on. Plymouth newspapers gave the tour big publicity. There were special articles about not only the tour but what wives and families would be doing while the Argyle lads were away. One paper even printed an itinerary so that readers could follow Argyles movements in the States.

I find it highly amusing to read that the Argyle lads found food prices in America frightening, Here's a sample of a comment from one of the party: "But food is a terrific price. Egg and Bacon with a coffee and toast costs anything up to a dollar fifty (roughly around 10s).

During the tour the players met a Mr James B Cook, then president of the Kloster Steel Corporation, who had played for Argyle in 1909 before settling in Chicago. The 'official' photographer on the tour was Johnny Porteous.

During the tour Jack Chisholm and Pat Jones had a mule race near St Louis. In Hollywood the team met Victor McLaglen and Gene Autrey. On a flight to Detroit they ran into a tropical storm and then had a very rough Atlantic crossing on the liner Flandre with most of the lads suffering from sea-sickness. 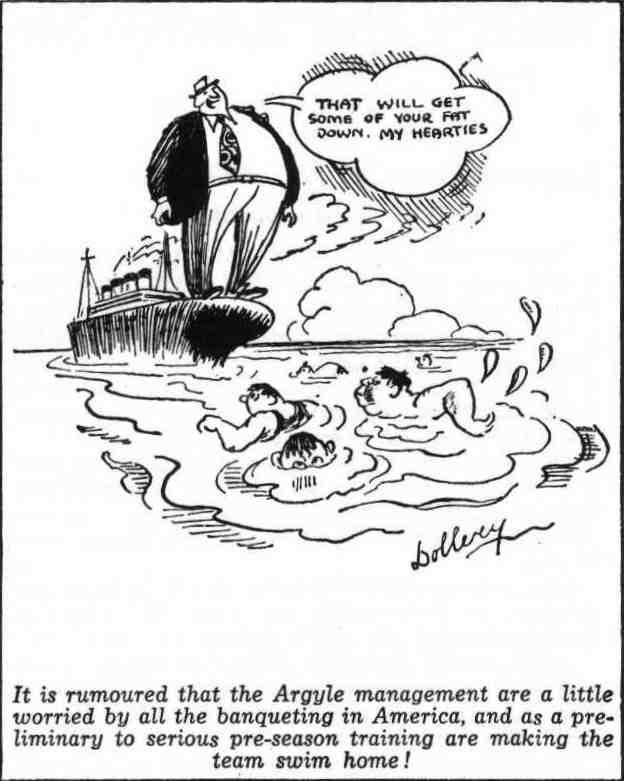 SOME MEMORIES OF THE AMERICAN TOUR

Between leaving Southampton on April 27th and arriving in Plymouth on June 9th Argyle's touring party travelled by Sea, Air and Land 14,000 miles in 44 days. Argyle spent 31 days in America and during that time they played 10 matches, winning 8, and losing 2, and they visited the following cities: New York (twice), Chicago (twice), St Louis, Denver, Hollywood, San Francisco, Detroit and Philadelphia. The French Line Ship, Ile De France, which took Argyle from Southampton to New York was built in 1927. Her length is 793 feet or 2½ times the length of the pitch at Home Park. She carries a crew of 800 and has accomodation for 1,300 passengers.

Johnny Porteous was the film man in charge of The Cine Camera on the tour with Les Major as his chief assistant. Las Vegas is the only city in the United States where gambling is allowed  - Argyle only stayed there 10 minutes. The Chicago Daily Tribunal described Jack Chisholm as the "bearded wrestling champion of the Royal Navy" but Jack does not remember being a wrestling champion nor does he remember serving in the Navy. During the war he was Guardsman Chisholm of the Irish Guards.

Jim Cook, who played for Argyle in the 1908-09 season, went to the United States in 1909 and applied for a job with General Motors. Jim is now president of the Kloster Steel Corporation of Chicago. Bill Shortt holds the Argyle Flying Record for 1954. Across the States and back with Argyle and across the Atlantic Ocean with Chelsea. About 10,000 miles travel in the Air. Argyle assisted Chelsea in America by lending Bill Shortt to them. Chelsea will assist Argyle in England by coming to Home Park to play under the Floodlights on Monday, 18th October.

Argyles longest journey in the States was from San Francisco to Chicago, a distance of 1,900 miles completed in 6½ hours but a journey that took longer was from Hollywood to San Francisco by bus, 400 miles in 10½ hours. The price of admission to Soccer matches in America was 1 dollar (7/-), and 1½ dollars (10/6). The charge for a Programme was 25 cents (1/9). New York has a population of 8 million and it is the largest Port in the world. It has been said that there is a wedding in New York every 3 minutes and a baby is born there every 5 minutes. The Empire State Building on 5th Avenue is the tallest building in the world, standing 1,250 feet high from the pavement and having 102 floors. 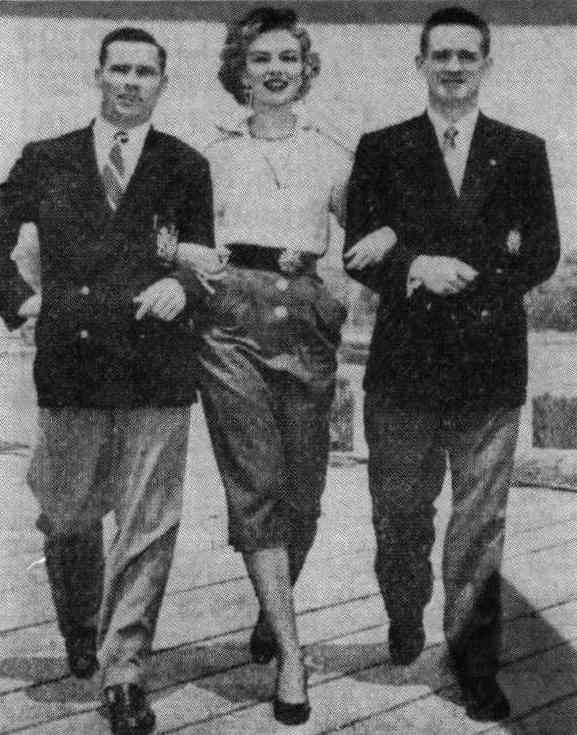 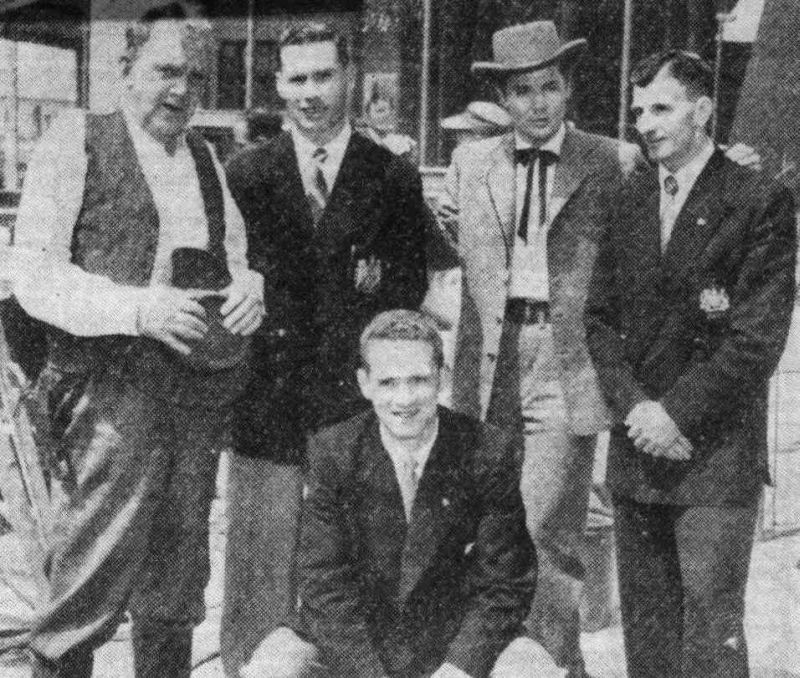 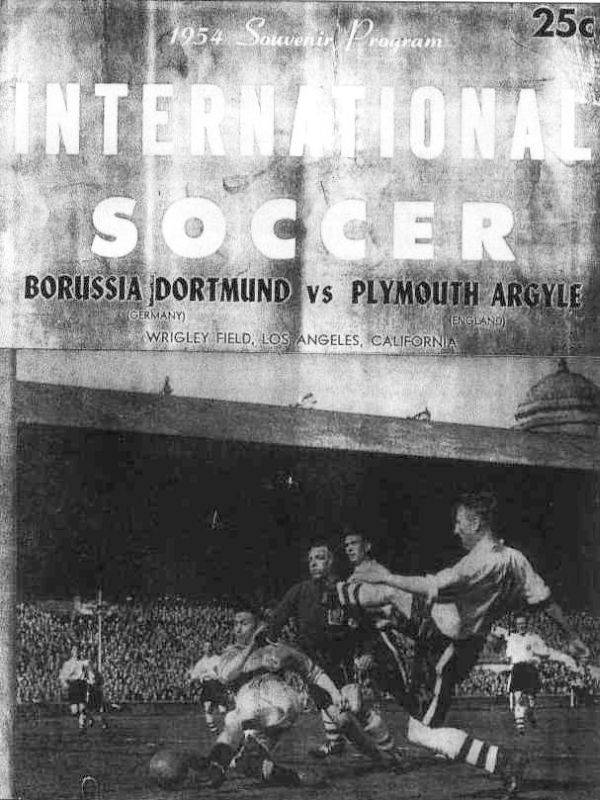 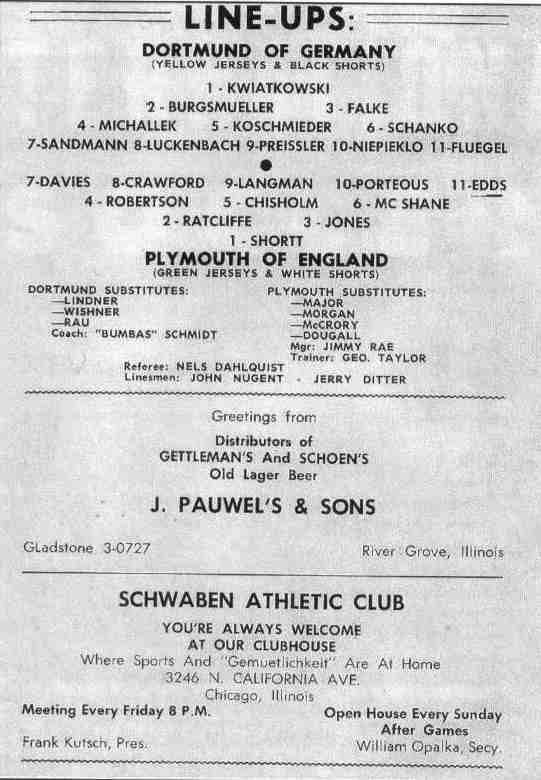 With grateful thanks to Gordon Sparks

Greens on Screen is run as a service to fellow supporters, in all good faith, without commercial or private gain.  I have no wish to abuse copyright regulations and apologise unreservedly if this occurs. If you own any of the material used on this site, and object to its inclusion, please get in touch using the 'Contact Us' button at the top of each page. Search facility powered by JRank Search Engine. Hover facility courtesy of Milonic. UK time at page load: 23 May 2022, 21:26.