THE ARGYLE TEAM EN ROUTE TO ARGENTINA  IN 1924 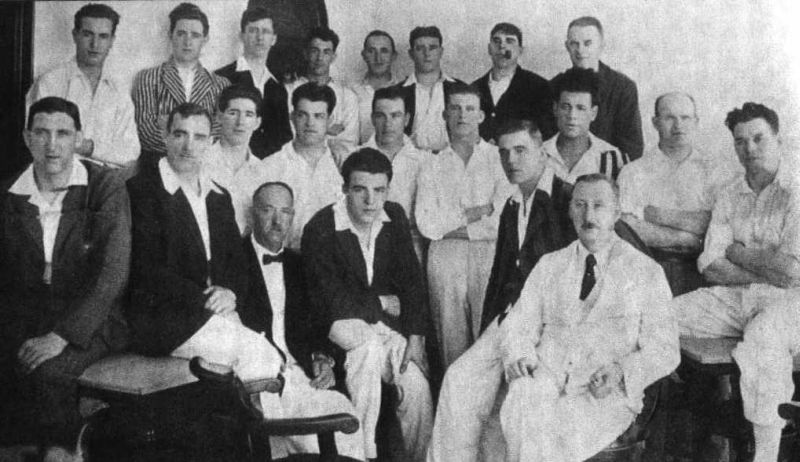 In the mid-twenties, and for a long time afterwards, overseas tours by Football League clubs were not as fashionable as they are today, so it might be of interest to many present day Home Park habituees to learn that thirty years ago - in 1924 - a Plymouth Argyle team visited South America to play some exhibition football in Uruguay and the Argentine.

Since the end of World War II, South American football has become a force to be reckoned with. During the Festival of Britain celebrations in 1951, the Argentine sent a representative team to play the England international side at Wembley; Uruguay will be remembered as recent World Cup holders; Arsenal, Southampton and the England team have visited Brazil; but in 1924, the standard of South American football was an unknown quality in this country.

In view of the immense strides that the football game has made in Continental and South American sides since then, it seems regrettable that such an interesting chapter in Argyle history has never been afforded the publicity it deserves.

Without authentic records for reference, inaccuracies in some detail may be inevitable, but it is remembered that the visit of Plymouth Argyle - as a prominent English football club - was an event of some importance to the football fraternity and created considerable interest in Latin-America at the time.

Owing to some delay in the original negotiations, the Argyle party did not arrive at Buenos Aires until mid-June, but the team received a great welcome from the British Colony on disembarking from the R.M.S.P.Avon. Mr W.W.Wakeling - representing the board of directors - Manager Bob Jack, Trainer Tommy Haynes and Mr F.W.Reeve, the well known Football League Referee, accompanied the team which included Moses Russell, Fred Craig, Billy Forbes, Cyril Eastwood, Bob Preston, Jimmy Logan, Fred Cosgrove, Bert Batten, Charlie Miller, Leslie Deacon, Patsy Corcoran, Frank Sloan, Percy Cherrett, Jack Leslie, Joe Little, Jack Fowler, Bruce Wallace, Johnny Walker, and Albert Fishwick ..... and many of these names are not yet forgotten on the terraces at Home Park.

The Argyle team spent five weeks in South America, and for the record, 9 games were played, 3 won, 3 lost and 3 drawn. Amogst the opponents in the arranged programme was the famous Rosario club whom Argyle met on two occasions, making a no score draw in the first match and losing by two goals to one in the second. Another prominent Argentine team whom Argyle defeated by a goal to nil was the Barracas club of Buenos Aires; but it might be of particular interest today to record that at Montivideo, Plymouth Argyle beat Uruguay by four goals to nil. At the conclusion of the tour, Mr Bob Jack declared that the standard of South American football was higher than he had anticipated to find and was quite equal to Third Divison standard at home.

The Argyle party returned to Home Park in mid-August, and there were some misgivings by a section of supporters that the South American tour might have an adverse effect on the promotion prospects of the 1924-25 season, fears which, however, proved to be groundless. 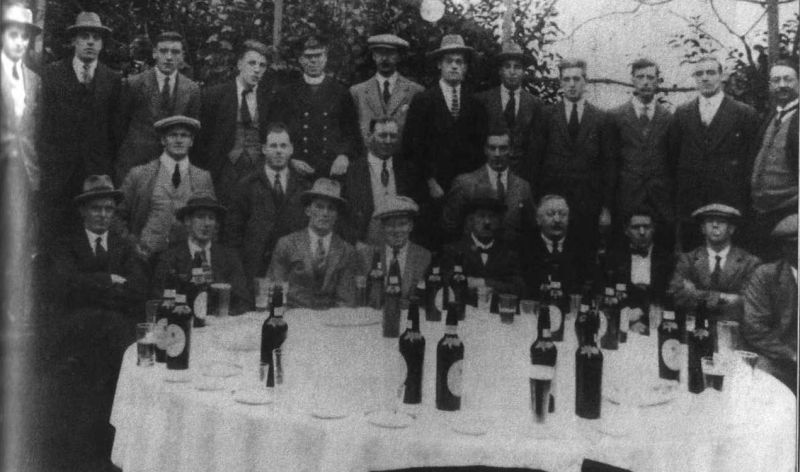 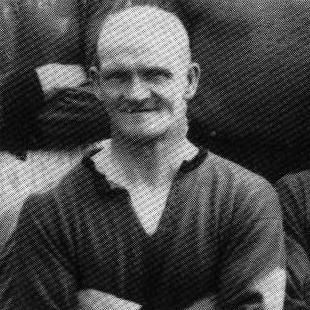 The displays of Moses Russell in particular caught the attention of the Argentine press and at the end of the tour The Standard of Buenos Aires commented: "The visit of Plymouth Argyle will be best remembered by the outstanding personality and genius of Moses Russell. His effective style, precise judgement, accurate and timely clearances, powerful kicking and no less useful work with his head.....one of the most wonderful backs and one of the brainiest players ever seen on the football field.

However, Moses was not always as popular on the tour and almost provoked a diplomatic incident during the game against Boca Juniors. Home supporters invaded the pitch after seeing their heroes score and carried all 11 shoulder high around the stadium, forcing the disbelieving Argyle players to retreat to the dressing rooms. After a half-hour delay the match resumed, but a further invasion was sparked when referee Fred Reeve - a Plymothian who had travelled with the Greens party - awarded a penalty against the home side. Once again the Argyle players had to seek sanctuary. From the safety of the dressing room it was decided, in the interests of all concerned, that Pilgrims winger Patsy Corcoran would take the spot-kick and miss. On the resumption he placed the ball, but before Corcoran could kick it the ultra competitive Russell shoved him aside and blasted it into the net. Unsurprisingly, the Boca fans invaded the pitch yet again, and this time the match was abandoned.

*with thanks to Andy Riddle 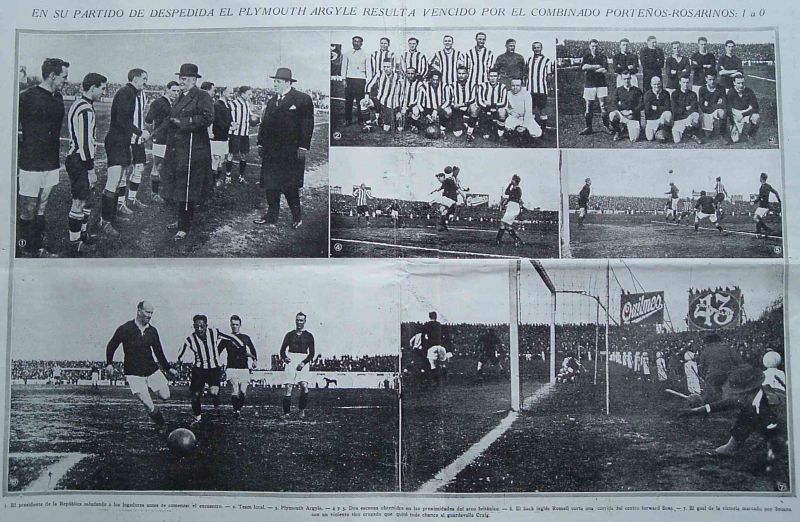 The following pictures are taken from a contemporary Argentinian magazine (as above) and show scenes from Argyle's final tour match against a combined side, recorded in official records as 'Argentinos'. I have included the title and captions and my attempts at translating them 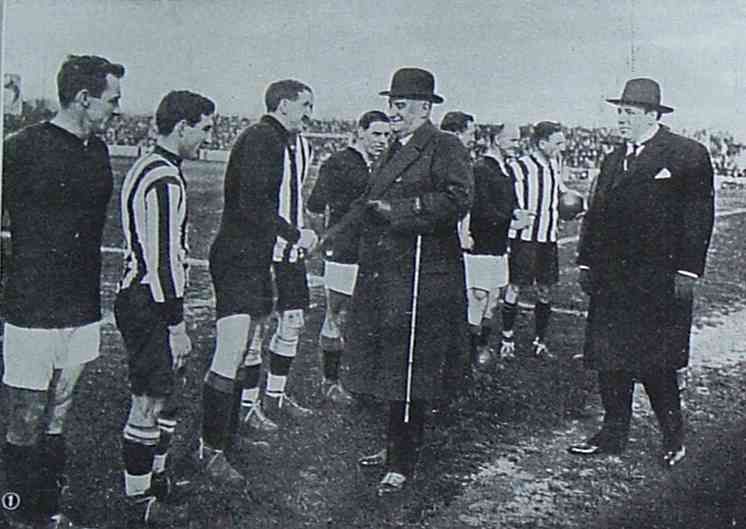 El Presidente de la Republica saludando a los jugadores antes de comenzar el encuentro
The President of the Republic meeting the players before the beginning of the encounter. 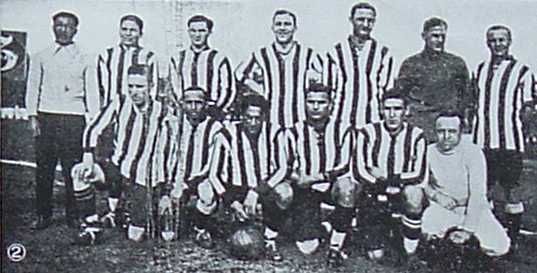 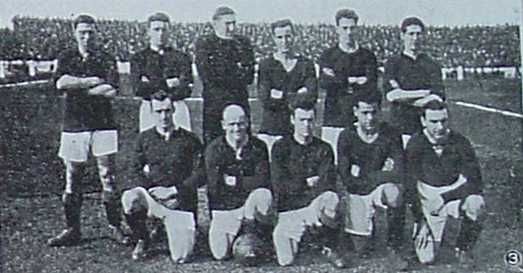 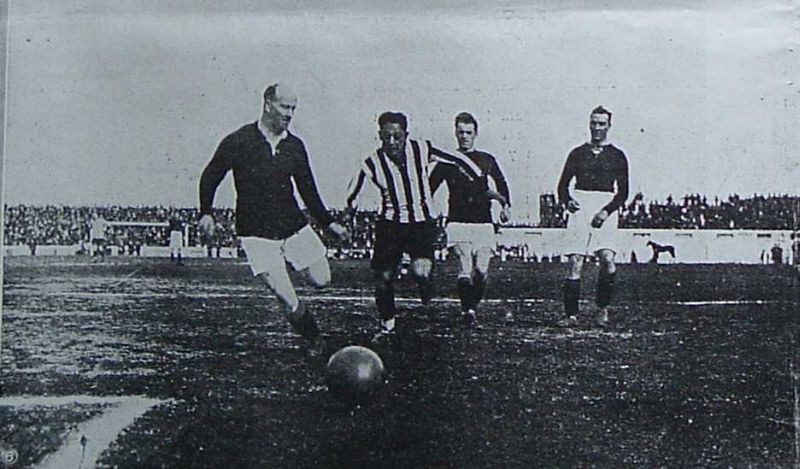 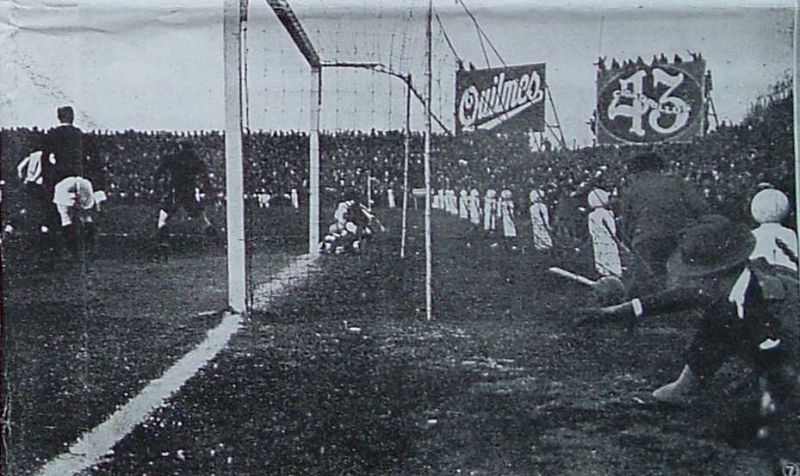 *with thanks to Paul Hobbs

This set of pictures are also taken from a contemporary Argentinian magazine, called Caras y Caretas (Faces and Masks), and show scenes from Argyle's second tour match, also against a combined side. I have again written out the captions and my attempts at translating them:

The British team, that in its second fixture, lost against the Argentineans

Greens on Screen is run as a service to fellow supporters, in all good faith, without commercial or private gain.  I have no wish to abuse copyright regulations and apologise unreservedly if this occurs. If you own any of the material used on this site, and object to its inclusion, please get in touch using the 'Contact Us' button at the top of each page. Search facility powered by JRank Search Engine. Hover facility courtesy of Milonic. UK time at page load: 23 May 2022, 19:57.