Argyle flew out of Gatwick on May 16th 1997 on their African adventure with Mick Jones preparing for his first match since being appointed manager. The Argyle party travelled overnight ready for the six hour flight to Banjul in the Gambia, where they were based at the Kololi Beach Club. Essentially, the trip provided the players with a relaxing end of season break but the highlight was the friendly match against the Gambian National side which kicked off at 5.30 local time on May 18th. Argyle were faced with overcoming temperatures in excess of 100 degrees - even though the match was being played in the evening. With the exception of Bruce Grobbelaar and Carlo Corazzin, all the players made the trip - even Tony James and Chris Leadbitter who had injuries. Mick Jones was asked to help coach young children in the Gambian villages during the week, and all the players met the High Commissioner and were involved in a golf tournament.


ARGYLE DRUM UP VICTORY IN GAMBIA

Goals from Richard Logan and Mark Patterson gave Argyle a 2-1 victory over the Gambian National side, the 'Scorpions' last night. Watched by a crowd approaching the 4000 mark and accompanied by the constant rhythmic beating of African drums, the Pilgrims scored twice in the first half before Gambia pulled one back after the break. Both goals came from set-pieces. The first was fashioned by Argyle's player of the year Chris Billy, who picked out captain Mick Heathcote in the penalty area with a pin-point free-kick. Heathcote headed back across the goal, where Logan was waiting to tap the ball in from close range.

The second goal came after the Gambian goalkeeper failed to collect a corner from Martin Barlow, leaving Patterson to head home at the far post. Midfielder Ronnie Mauge said afterwards that the game had been played in emmense heat, and that the enthusiasm of the home crowd had been awesome. "It was hot, and a few of the lads struggled in the first half," he said, "but that was only to be expected. The atmosphere in the stadium was unbelievable. I have never known anything like it."


ARGYLE ARE HOT STUFF WITH WIN OVER GAMBIA

Plymouth Argyle overcame the heat to earn themselves a comfortable 2-1 victory over Gambia in Banjul last night. Goals from Richard Logan and Mark Patterson gave them a 2-0 interval lead and Argyle always looked worthy winners even though Gambia pulled back a late goal. Kevin Blackwell, who had been assisting manager Mick Jones said: "The lads played very well and passed the ball around in front of an impassioned Gambian crowd of nearly 6,000. Full credit to our players for overcoming the conditions, with temperatures reaching 110 degrees."

Logan volleyed Argyle into a 12th minute lead after Mick Heathcote headed a Martin Barlow corner from the far post. Patterson struck in the 35th minute when he scored from a far post header after the Gambian goalkeeper failed to cut out a left wing cross from Logan. Although not getting among the goals, Adrian Littlejohn had an impressive game in attack. "We produced a particularly good first half performance," said Blackwell. "We expected Gambia to be a bit lively and they stepped up the game after the interval but we quelled their fire." Gambia scored on the break 10 minutes from the end when a home player forced Chris Curran off the ball and drove under keeper James Dungey. "That set up an interesting finish, but we played out the game easily," said Blackwell. 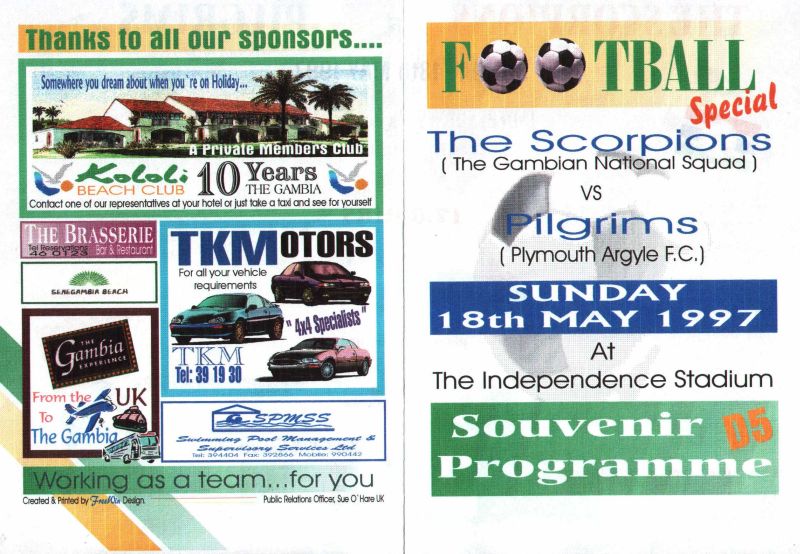 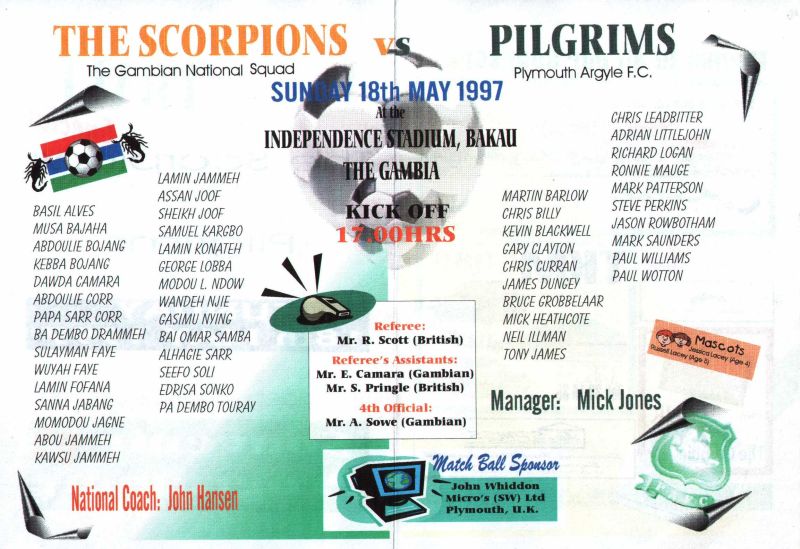 Well, it's a far cry from Blackpool on a wet Tuesday night. The Independence Stadium resembled a cauldron with temperatures in the upper 90s. Amongst a crowd estimated at 10,000, I settled down to watch the boys in green take on the Gambia Scorpions. After ten minutes of incessant drumming in my left ear, I decided to move on while I still had my sense of hearing!

The game commenced with Argyle attacking strongly  their game plan seemed to be centred around a few short passes, then a long ball down the middle. At least on this occasion, there was some purpose about Argyles long ball strategy. Gambia appeared to struggle against Argyles more physical approach. Adrian Littlejohn was looking more like his old self, taking on defenders and beating them for pace (but why does it take a meaningless friendly 3,000 miles away from home?).

Eventually, Argyles pressure told with Richard Logan heading in from a Martin Barlow corner after about 20 minutes. A quarter of an hour later, Chris Billy got to the bye-line and crossed; the keeper came and completely missed the ball (now where have we seen that before?), leaving Mark Patterson to head into an empty net (a rare Patto headed goal!). This proved to be the end of the road for the Gambian keeper who, when substituted a couple of minutes later, threw himself to the ground in tears (conceding two goals to Argyle must have seemed like the end of the world). Argyle continued to control the game up to the half time whistle.

The second half commenced with the Gambians looking decidedly more interested and sharper. Argyle began to be pushed back, with a couple of half-chances being squandered by the home forwards. The Gambian centre-forward then proceeded to blaze wide with only Dungey, who had been badly exposed by his defence, to beat. Whilst the Gambians were starting to dominate, Argyle still posed problems at the other end, with Neil Illman firing wide on a couple of occasions. By this time, it was becoming difficult to keep up with exactly who was left on the pitch as substitutions were being made on a ridiculously frequent basis.

Eventually, the pressure from the Gambians paid off with a goal being fired home by Momodou Jagne after 75 minutes, after the Argyle defence had once again been badly exposed. The final 15 minutes saw Argyle soak up fierce pressure from the home team with a succession of corners being stoutly defended by Argyle (one of which needed to be headed off the line). The final whistle went with Argyle hanging onto a hard-fought victory. All in all, a very competitive friendly.

Just two points to finish on. The most expensive seats in the ground cost only 10 dalasi (about 70p)  certainly the least I've ever paid to watch Argyle! Secondly, my abiding memory of the whole day was in the main car park afterwards, where I saw one of the other Argyle supporters conducting about 30-40 Gambian children in a chorus of Green Army. Noddy might have some rivals after all.

*This match report was written by Lewis Ridge and first appeared in  Pasty News in June 1997. With thanks to John Lloyd.

Greens on Screen is run as a service to fellow supporters, in all good faith, without commercial or private gain.  I have no wish to abuse copyright regulations and apologise unreservedly if this occurs. If you own any of the material used on this site, and object to its inclusion, please get in touch using the 'Contact Us' button at the top of each page. Search facility powered by JRank Search Engine. Hover facility courtesy of Milonic. UK time at page load: 23 May 2022, 19:51.