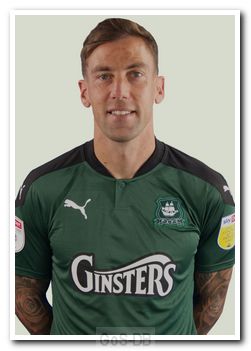 Born in Enfield, North London, Sawyer moved to Bideford at an early age, and as a product of the Argyle youth set-up, developed into a versatile left-back or central defender. After signing a professional contract with Argyle, he had a spell on loan with Weymouth in 2003-04 and then spent the next two seasons on loan at Exeter City. Whilst at St James Park he played in the famous FA Cup ties against Manchester United and made over 70 appearances.

On his return to Home Park he established himself in the first team squad and was voted the club's Young Player of the Year in 2006-07. The first-choice left-back for the majority of the following three seasons, Sawyer missed some time due to injury and, after turning down a new contract offer, moved on loan to Bristol City in March 2010. That summer he did make the move to Bristol, but to Rovers not City, on a two-year deal. Despite failing to score in 69 games for the Gas, Russell Slade made Sawyer his first summer signing of 2012 for Leyton Orient. In three seasons with The O's he played 88 times and scored a single goal before being released by the club following their relegation to League Two at the end of the 2014-15 season.

In June 2015 Sawyer returned to Home Park for a second spell, becoming the first signing of Derek Adams' reign.

From being a virtual ever-present in his first season under Adams, his second campaign was impacted by injury, and he made just 22 appearances throughout the 2016-17 season as Ben Purrington established himself in the first team. However following Purrington's sale to Rotherham at the end of January 2017, and Sawyer's recovery from injury, he re-established his position in the side and finished the season strongly.

On the day before the start of pre-season training in late June 2017, Sawyer accepted the offer of a new contract at Home Park, as Argyle prepared for life back in the third tier.

Greens on Screen is run as a service to fellow supporters, in all good faith, without commercial or private gain.  I have no wish to abuse copyright regulations and apologise unreservedly if this occurs. If you own any of the material used on this site, and object to its inclusion, please get in touch using the 'Contact Us' button at the top of each page. Search facility powered by JRank Search Engine. Hover facility courtesy of Milonic. UK time at page load: 04 July 2022, 10:31.