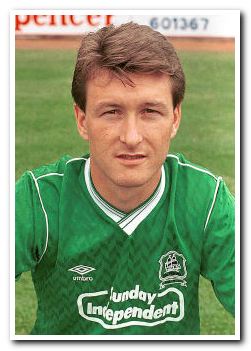 Thomas was a classy and elegant attacking midfielder who most would have wanted to have seen more of in Green.

Born in Oxford in 1962, he started his career with Oxford United, making 116 appearances and scoring 32 times in a six-year spell in United's surge up the leagues to the top flight. Whilst at the Manor Ground he had two brief one-month loan spells in the 1982-83 season at Fulham and Derby County. He also received a League Cup Winners' medal as substitute in Oxford's 1986 League Cup Final win over QPR. His top flight efforts brought him to the attention of larger League rivals and in 1986 he moved to Newcastle United. Unable to establish a regular berth in midfield at St James Park, he then moved to Bradford City in the summer of 1988, and a year later, Ken Brown brought him to Home Park.

Thomas was a player who ended up epitomising the type of attractive football Brown's tenure at Home Park was characterised by. Making his debut on the opening day of the 1989-90 season, he went on to make 58 appearances for the Pilgrims and a highly impressive return of 22 goals. Sadly, continuing back problems and other injuries proved insurmountable, forcing him out of the professional game. In 1991 he left Home Park to return close to his roots, becoming player-manager of non-league Oxford City.

Cor.......words fail me! In an era when as a young lad, one grew up worshipping the 'glory' roles -'keeper or striker - he made me sit up and take note. A classy, Rolls Royce of a midfielder who made me realise the true artistry of the position when played in a classy, attacking guise. He had a Frank Lampard strike rate, long before Frank Lampard was out of short trousers and was the absolute pivot of some of the glorious football played by Ken Brown's side. He'd played at the highest level before he played for us (and it showed), and but for a reoccuring back injury he would have surely played for us more. To be fair, had it not been for an avalanche of goals by Sir Thomas of Tynan, he could have and probably should have walked the Player of the Year for 1989-90. What we wouldn't give for his like now.

Greens on Screen is run as a service to fellow supporters, in all good faith, without commercial or private gain.  I have no wish to abuse copyright regulations and apologise unreservedly if this occurs. If you own any of the material used on this site, and object to its inclusion, please get in touch using the 'Contact Us' button at the top of each page. Search facility powered by JRank Search Engine. Hover facility courtesy of Milonic. UK time at page load: 17 May 2021, 16:45.