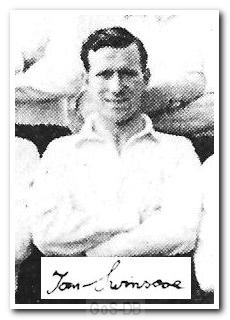 Swinscoe was one of 27 in the guest category. Born in Sutton-in-Ashfield in Nottinghamshire, he was a fan of the game as well as playing it, quite literally, because he was spotted by Chesterfield playing centre-forward for Shirebrook Supporters FC. Shirebrook, in north-east Derbyshire on the Nottinghamshire border, was home to Shirebrook Colliery FC (precursor to the present-day Shirebrook Town), a team whose own supporters had an active, fund-raising football team themselves, winning the 'Derbyshire Medal' on Good Friday 1946 no less. It was from the Supporters' Team that he moved to Chesterfield, enabling him to make his Football League debut when the League programme fully resumed. Despite the improbable step-up, the move was a success; he made his debut in the 1946-47 season and scored 12 times in 43 appearances across two seasons. Towards the end of 1947 he moved on to Stockport County and spent three years with the club, playing 72 times and scoring 31 goals. His next move was to Peterborough United, some 10 years before they joined the Football League.

Note: Tom should not be confused with Terry Swinscoe who also played for Stockport County and later for Mansfield Town. Unlike Tom, Terry (who was no relation) never donned Green but did once famously score two own-goals for Argyle in Town's 8-3 hammering at Home Park in March 1959.

Greens on Screen is run as a service to fellow supporters, in all good faith, without commercial or private gain.  I have no wish to abuse copyright regulations and apologise unreservedly if this occurs. If you own any of the material used on this site, and object to its inclusion, please get in touch using the 'Contact Us' button at the top of each page. Search facility powered by JRank Search Engine. Hover facility courtesy of Milonic. UK time at page load: 17 May 2021, 17:37.