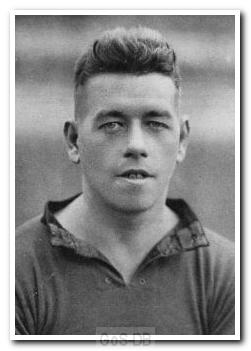 Born in Crofton, near Wakefield, Roberts started out locally with Castleford Town and was duly spotted by Leeds United, signing for the Elland Road club in 1925. He went on to make 84 appearances for The Peacocks, scoring twice in a five year spell. Brought to Home Park in November 1930, Roberts spent seven years as Argyle's first choice right-back and his scoring record was aided by an excellent record as penalty-taker. As well as captaining the side for a number of seasons, he was also one of the characters of the thirties' team. On one occasion, allegedly, he gave an imperious performance somewhat under the influence of alcohol. On another, it was said that he burst the ball with one of his kicks. He was greatly liked within the club - his power and strength earned him the nickname 'Rock of Gibraltar' - but his popularity did not extend to referees; his disciplinary record was not the best.

With the emergence of Sam Kirkwood, Roberts left Home Park in 1937 for a fee of £820. He had two years with Bristol Rovers, playing 77 times across two seasons before his League career was ended by the outbreak of war. He returned, briefly, to the north in 1939 to play for Frickley Colliery, but during the war he settled back in Plymouth and for many years ran a fruit & veg stall, initially in 'Tin Pan Alley', the temporary market stalls erected immediately after the war, and then in the present-day pannier market when it opened in 1959. A keen golfer and bowls player, Harry Roberts died in Plymouth Naval Hospital in May 1968 at the age of 63.

Greens on Screen is run as a service to fellow supporters, in all good faith, without commercial or private gain.  I have no wish to abuse copyright regulations and apologise unreservedly if this occurs. If you own any of the material used on this site, and object to its inclusion, please get in touch using the 'Contact Us' button at the top of each page. Search facility powered by JRank Search Engine. Hover facility courtesy of Milonic. UK time at page load: 07 May 2021, 20:38.