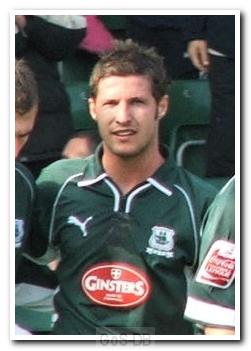 Born in Peterborough, Norris started his career at Boston United before moving to Bolton Wanderers in February 2000, a few weeks short of his 19th birthday. Unable to break into Wanderers' first team, he was loaned back to Boston and also to Hull City before joining Argyle on loan in October 2002, scoring the winner on his debut at Crewe. Under Paul Sturrock's charge he settled quickly at Home Park and two months later agreed a permanent contract.

'Chuck' was one of the most consistent and impressive performers in Argyle's Division Two title win in 2003-04 and throughout the next three seasons in the Championship. He was also named Argyle's Player of the Season in 2005-06. He was a combative midfielder who had an incredible engine and endless energy. His form with Argyle led to interest from several clubs and eventually, on the last day of the January transfer window in 2008, he moved to Ipswich for a club record receipt of around £2.25 million, part of which had to be paid to Bolton due to a sell-on clause.

Norris spent three years at Portman Road and was handed the skipper's armband by manager Roy Keane, in all making 106 appearances and scored 13 times. In the summer of 2011 he was offered a two-year extension at Portman Road, but he held out for a three-year deal. With no movement on the offer, and with Leeds United interested, he moved to Portsmouth on a free transfer for the 2011-12 season. Norris went on to make 40 appearances and scored eight times for the Fratton Park side, including a spectacular last minute equaliser against bitter rivals Southampton in April 2012.

With Portsmouth struggling financially, in July 2012 Leeds United finally got their man when he moved to Elland Road for the 2012-13 season, where he played 36 times and scored four goals. With fate repeating itself, as it had at Portsmouth, Leeds United needed to raise funds and thus he was made available for transfer in August 2013. Remaining hugely popular with Argyle fans (he had donated to emergency funds when the club was in administration), he was serenaded with a heartfelt chorus of We want our Norris back! when paraded as a half-time guest in the Sky-televised clash between his two former clubs, Argyle and Portsmouth, at Home Park in October 2013.

But it was not to be; Norris remained on Leeds' books but was rarely selected over the following year and a half. He was released on transfer deadline day at the beginning of February 2015 and two weeks later signed for Peterborough United, his hometown club, until the end of the season. Finding himself without a contract again, his next move was back to the South West in August 2015, to play once again for Paul Sturrock on a non-contract basis at Yeovil Town. However, after just a single game for the Glovers he left and signed for League One rivals Blackpool, having been offered a contract until the end of the 2015-16 season.

Norris went on to play 36 times for Blackpool, scoring once, before winding down in non-league football. He played a single game for Leatherhead after signing in September 2016, before then moving to ambitious Salford City (bankrolled by ex-Manchester United players, Ryan Giggs, Gary & Phil Neville, Paul Scholes and Nicky Butt) on a deal until the end of the 2016-2017 season as they tried to secure promotion to the top-flight of non-league football.

Having left Salford, Norris found himself back in the spotlight in November 2017 whilst playing for Barnsley-based Northern Premier League (Premier Division) side Shaw Lane, who reached the first round proper of the FA Cup for the first time in the club's short history, having formed in its latest guise in 2012.

Greens on Screen is run as a service to fellow supporters, in all good faith, without commercial or private gain.  I have no wish to abuse copyright regulations and apologise unreservedly if this occurs. If you own any of the material used on this site, and object to its inclusion, please get in touch using the 'Contact Us' button at the top of each page. Search facility powered by JRank Search Engine. Hover facility courtesy of Milonic. UK time at page load: 19 May 2022, 18:51.