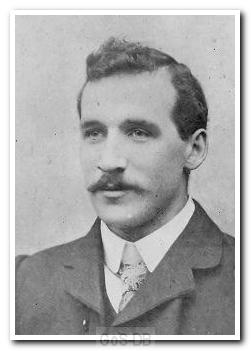 Note: One record book says that the goalscorers in the match against Kettering Town on 17th Oct 1903 were Dalrymple, Picken (2) and Peddie (2) but the match report in the Western Morning News clearly describes each goal, with Dalrymple scoring two and Picken one. The goals-scored totals for Dalrymple and Picken are therefore different from at least one source.

Came from: Heart of Midlothian   Went to: Rangers

A versatile player, he was a fixture in the Argyle team for the next two years, filling a variety of forward roles, but mainly as an outside-right. He returned to Scotland in 1905, signing for Rangers, but only stayed in Glasgow for one season before moving to Portsmouth. A three-year stint at Fulham followed, where he scored 39 goals in 98 games, before a war-interrupted nine years with Clapton Orient, for whom he made 139 appearances and scored 38 times. He ended his career with a brief spell at Welsh Southern League side Ton Pentre.

Greens on Screen is run as a service to fellow supporters, in all good faith, without commercial or private gain.  I have no wish to abuse copyright regulations and apologise unreservedly if this occurs. If you own any of the material used on this site, and object to its inclusion, please get in touch using the 'Contact Us' button at the top of each page. Search facility powered by JRank Search Engine. Hover facility courtesy of Milonic. UK time at page load: 03 December 2021, 12:23.