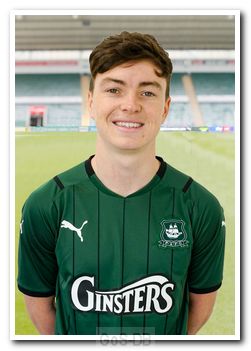 Lewis became Steven Schumacher's first-ever signing when the 22-year-old midfielder joined the Pilgrims from St Patrick's Athletic in the Irish Premier Division, after an outstanding season which saw the Saints win the FAI Cup and finish second in Ireland's top flight.

Essex-born Lewis began his football with West Ham United, where he spent 12 years after joining at the age of eight. His progress through the Hammers' academy culminated in a professional contract in May 2017, and then a one-year extension in 2020. He played over 60 times for West Ham's Premier League 2 side and featured 12 times for the under-21 team that took part in the EFL Trophy, the first coming at the age of 16. He also made West Ham's first-team bench in a Premier League match against Chelsea in July 2020.

Lewis crossed the Irish Sea to begin a loan spell with St Patrick's in February 2021, ahead of their March-to-November season. In June 2021, having been released by West Ham, he opted to remain with the Dublin-based club for the rest of their season, in which he played 31 times and scored three goals.

Described as a technical midfielder who likes to dictate games, Lewis was in Argyle's sights when he left the London Stadium, and the club finally got its man six months later when he became Schumacher's first capture of the January 2022 transfer window.

Greens on Screen is run as a service to fellow supporters, in all good faith, without commercial or private gain.  I have no wish to abuse copyright regulations and apologise unreservedly if this occurs. If you own any of the material used on this site, and object to its inclusion, please get in touch using the 'Contact Us' button at the top of each page. Search facility powered by JRank Search Engine. Hover facility courtesy of Milonic. UK time at page load: 23 January 2022, 09:11.