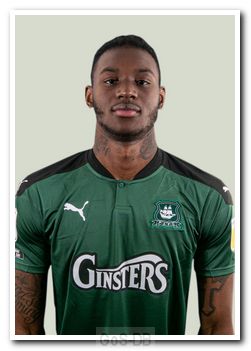 Born in Mitcham in south London, Opoku crossed the river in 2008 to join Fulham at the age of nine. After progressing through the age groups, he made his debut for the Cottagers' under-18 squad at just 15 years old in 2014, and signed a scholarship deal with the club ahead of the 2015-16 season. After strong and consistent performances in the heart of the under-18's defence, he was rewarded by training with and playing for the first team during their pre-season preparations in July 2017.

Having impressed in the reserve set-up, the 6'4" centre-back claimed the captain's armband for the London club's Premier League 2 side towards the end of their 2018-19 campaign, before signing a new long-term deal. He then joined Accrington Stanley on a six-month loan in September 2019, which was extended until the end of the season after impressing in the EFL's third tier.

Greens on Screen is run as a service to fellow supporters, in all good faith, without commercial or private gain.  I have no wish to abuse copyright regulations and apologise unreservedly if this occurs. If you own any of the material used on this site, and object to its inclusion, please get in touch using the 'Contact Us' button at the top of each page. Search facility powered by JRank Search Engine. Hover facility courtesy of Milonic. UK time at page load: 07 May 2021, 13:17.