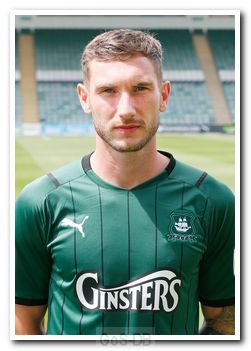 Mayor arrived at Home Park in the summer of 2019 after six seasons and 235 appearances for Bury, joining forces with Ryan Lowe, Argyle's new manager and Mayor's former boss at the Greater Manchester club.

The Leyland-born creative midfielder began his career at Preston North End as a junior, graduating to the professional ranks in 2008. He gained added experience with a brief loan spell at Tranmere Rovers before settling into the Preston side.

Over the next couple of seasons, Mayor began to make a fine impression and was named Prestons Young Player of the Season in 2012. After 77 appearances for PNE he moved to Sheffield Wednesday in 2012 but found first-team opportunities limited, prompting a temporary stint at Southend and then a season-long loan with Bury.

Mayor was a revelation at Gigg Lane and the move was soon made permanent. He was first a team-mate of Ryan Lowe and then played a key role under Lowe as the Shakers defied financial turmoil off the pitch to win promotion to English football's third tier in 2018-19, being named in the League Two Team of the Season for a second time.

Greens on Screen is run as a service to fellow supporters, in all good faith, without commercial or private gain.  I have no wish to abuse copyright regulations and apologise unreservedly if this occurs. If you own any of the material used on this site, and object to its inclusion, please get in touch using the 'Contact Us' button at the top of each page. Search facility powered by JRank Search Engine. Hover facility courtesy of Milonic. UK time at page load: 23 January 2022, 08:27.