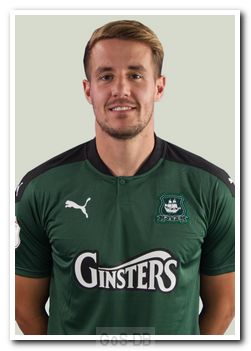 Where once there was a Wotton, there was then a Wootton. Four years after his near-namesake's last game for the Pilgrims, Scott Wootton became Derek Adams' ninth summer signing at the end of June 2018. The Birkenhead-born central defender once cost £1million and had Champions' League experience on his CV.

After beginning his career locally with Tranmere Rovers, he then joined Liverpool at the age of 13. He made his under-18 debut for the Reds at just 14 but then swapped the red of Merseyside for that of Manchester, signing for United in 2007. He became captain of the United academy side in 2009-10 and was promoted to the reserve team the following year. In September 2010 he then re-joined boyhood club Tranmere on an initial one-month loan, where he scored on his debut. He went on to make nine appearances with just the single goal.

Wootton made his first unofficial appearance for Manchester United when he featured in Gary Neville's Testimonial game in May 2011. In July he made a loan switch to Peterborough United, where he made 14 appearances, including a 7-1 debut win over Ipswich, before the deal was cut short in the last week of January 2012.

He was then loaned to Nottingham Forest for the remainder of the 2011-12 season, making 13 appearances. In September 2012 Wootton made his Manchester United first team debut in a League Cup tie at home to Newcastle United. The following week it got even better as he made his Champions' League debut in a 2-1 win over CFR Cluj of Romania, replacing Jonny Evans in the second half. In total he played four times for the United first team.

After a further three games for Peterborough in a second loan spell in early 2013, Wootton joined Championship side Leeds United that August for a one million pound fee and played 74 times, scoring once, across three seasons. During his time at Elland Road he joined Rotherham in another loan deal (7 games) but an impressive run of form for the Millers prompted him to be reinstated at Elland Road.

Released at the end of his three years at Leeds, Wootton joined MK Dons in August 2016 but suffered a serious knee injury that same month, leaving him sidelined for the most of the 2016-17 season. However, he bounced back to be a near ever-present in this second season with the Dons, including a 1-0 win for his side at Home Park in September 2017. He played 47 times (one goal) for the Buckinghamshire club but after relegation at the end of the 2017-18 season, he was released and joined Argyle as a free agent.

Greens on Screen is run as a service to fellow supporters, in all good faith, without commercial or private gain.  I have no wish to abuse copyright regulations and apologise unreservedly if this occurs. If you own any of the material used on this site, and object to its inclusion, please get in touch using the 'Contact Us' button at the top of each page. Search facility powered by JRank Search Engine. Hover facility courtesy of Milonic. UK time at page load: 07 May 2021, 15:08.