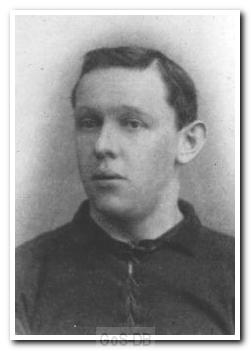 Note: (1) One record book says that Fred Buck scored the first goal against Luton Town on 24 Sep 1904, another says it was Johnny Banks. The match report in the Western Morning News clearly describes the goal scored by Banks. (2) At least one record book says that all four goals in the match at Northampton on 9 Sep 1905 were scored by Fred Buck. However, the match reports in the Western Morning News, Western Evening Herald and many national newspapers show that the second goal was scored by Bob Jack. The totals for each player are therefore different from those in many record books.

Born in 1879 in Audley, Staffordshire, Buck started his career with local club Newcastle-under-Lyme and also had spells with Stafford Wesleyans and Stafford Rangers before joining West Bromwich Albion in 1900. In May 1903 he signed for Liverpool, but his stay there was short and he joined Argyle towards the end of their first season as a professional club.

Buck was virtually ever-present for Argyle over the next two years, playing primarily at inside-right, and was renowned as a hard worker with the best shot in the team. Returning to West Brom in April 1906, he spent a further eight years at The Hawthorns, making 265 appearances and scoring more than 80 goals for the club. He finished his career with a three-year spell at Swansea Town.

Greens on Screen is run as a service to fellow supporters, in all good faith, without commercial or private gain.  I have no wish to abuse copyright regulations and apologise unreservedly if this occurs. If you own any of the material used on this site, and object to its inclusion, please get in touch using the 'Contact Us' button at the top of each page. Search facility powered by JRank Search Engine. Hover facility courtesy of Milonic. UK time at page load: 03 December 2021, 13:00.