After a short sleep for some of the players on arrival at Obertraun, a two-hour training session was held at the team training camp. However, there was no afternoon snooze for physiotherapist Paul Maxwell who had work to do on Hasney Aljofree's left ankle. After an injury sustained at St Blazey, the offending area swelled up on the flight to Austria. Jason Bent, fresh from his Gold Cup exploits, also received treatment on his feet. Following the training session, manager Paul Sturrock sent the players into the nearby river to cool off. Timing was perfect, as just after the players changed for a dinner of pasta and salmon, a heavy thunderstorm ensued which lasted for about four hours. This morning, training began at nine, after a breakfast of yoghurt, cheeses and meats. This afternoon, the squad set off for Pettenbach Stadion to face German side SV Wacker Burghausen, who finished 10th last season in the German second division. There was a scare from the Romanian side Astra Ploiesti, who are due to meet Argyle and a local side in a three-team tournament on Saturday. The volatile Romanian coach threatened to pull out unless certain demands were made, but that particular storm appears to have blown over and normal plans can resume. 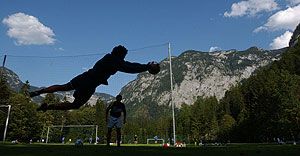 Plymouth boss Paul Sturrock took plenty of positives from his side's friendly against German side SV Wacker Burghausen in Austria despite the 1-0 defeat - and the sending off of Paul Connolly. "Micky Evans led the line well. I also thought our shape and pattern were good and we looked comfortable against a quality team," said Sturrock."It was evident that it was our first match of this tour - whereas the Germans have played in seven matches," he added. However, he was disappointed with Connolly - who was sent off three minutes into the second half following two rash challenges: "That ruined the game. Connolly had a rush of blood and it spoiled the exercise.
He'll have to learn very, very quickly that that kind of thing won't be tolerated," said Sturrock.

The only goal of the game was down to poor positioning from 'keeper Luke McCormick, who was caught off his line in the 29th minute. "Luke made some good saves, but on the goal he must learn his distances. He ran, then stopped," said Sturrock. SV Wackerburghausen coach Rudi Bommer praised Argyle's performance. Bonner felt that his team were given a tougher test by Argyle than by Dundee United, who managed a 1-1 draw against the German outfit. Around 200 travelling Plymouth fans cheered their side on against Wacker Burghausen on Wednesday night. Argyle are next in action on Saturday, when they will be taking part in a three-team tournament.

Today the players had an early morning training session and will have another exercise during the early part of the evening, writes Gordon Sparks in Austria. During the afternoon, there is the opportunity to visit Mount Krippenstein and to explore the ice caves. The mountain can be easily seen from the training camp at Obertraun. However, the view was not particularly good yesterday afternoon. The cable cars, which take visitors to the popular tourist destination, became stuck after a lightning strike - in what has become a regular feature in the first few days of the tour - cut off the power supply. But the weather is better today, with temperatures expected to reach the mid 30´s, so the coolness of the caves should come as a blessing.

Some of the travelling Green Army are taking the opportunity to watch more football over the next two days, including a glimpse of Arsenal, who arrived in the east of the country on Monday. Around 200 fans were at Pettenbach last night, with only 20 German fans making the 120 kilometre trip from Burghausen. But the atmosphere was good, with a number of supporters exchanging scarves and enjoying the stadium hospitality. There were also about 100 locals who were inquisitive enough to see a game involving two foreign sides at their stadium.

I was fortunate enough to be invited by the stadium announcer to be the English voice on the tannoy for the evening, and some of the Argyle players seemed rather non-plussed when asked to line-up with the German team for the playing of the respective national anthems. For the squad, thoughts will now turn to the two mini-matches on Saturday in the three-team tournament at Schwanenstadt, but Paul Sturrock told me that he may consider cancelling the game on Monday against local side Bad Aussee if there are a number of knocks received. Hopefully, that will not be the case. Travelling fans will have the opportunity of seeing the players who were not on duty last night, including Marino Keith, who has been looking particularly sharp in training.

After a day of double training, the Pilgrims´ coaching staff joined supporters for a social evening which included a football quiz. Graham Coughlan may be on the bench for the three-team tournament on Saturday at Schwanenstadt between Argyle, SC Schwanenstadt and FC Petrolul Astra Ploiesti. The central defender has been receiving treatment for a bruised heel, but David Norris is rated by Paul Sturrock as 'struggling' as a result of hamstring and thigh problems. Sturrock said he is delighted with the way training has gone over the last couple of days. "We are very pleased. We're getting some good quality sessions in and the condition of the training pitches are second to none." This afternoon, everyone in the travelling party will be taking a cable car tour - with one notable exception. Micky Evans cannot be persuaded to try to overcome his fear of heights, but the popular Plymothian was more than happy to accept the punishment of a club fine. Evans' new-look Mexican moustache has been the source of much amusement, and he is now trying to persuade his colleagues to join him to raise money for charity

Plymouth Argyle are still searching for the scoring touch after Saturday's three-team tournament in Schwanenstadt. Made up of three 45-minute matches, the 'Blitz Tournier' was played in heat in excess of 90 degrees, forcing the spectators to take shelter in the stadiums only covered stand. The tournament opened with a goal-less draw against the host club, SC Schwan Schwanenstadt, who boasted a number of Austrian under-19 and under-21 internationals and two players with full caps. Few chances were created, but the best fell to Paul Connolly who tried to latch on to a cross with a header that went inches wide of the mark. With only a ten-minute break, Paul Sturrock made just one change for the game against Petrolul Astra Ploesti. The Romanians fresh legs were the difference in the opening stages, and they proved to be a well-organised outfit. Although suffering a single-goal defeat, the Pilgrims had Romain Larrieu to thank for two breathtaking saves  one of which came from a fierce angled volley. Petrolul Astra Ploesti, who merged with another club just two weeks ago, then went on to beat the Austrian side by a single goal to claim maximum points. Argyle officials were quick to praise the hospitality of the Schwanenstadt club, and also the sportsmanship displayed by all three teams. 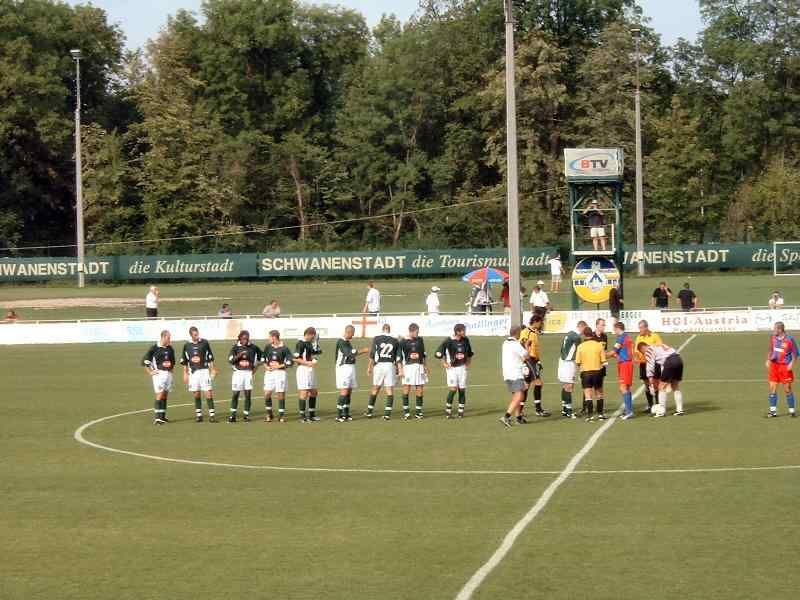 Argyle line up prior to playing Petrolul Astra Ploesti

On Friday night, the Pilgrims´ coaching staff and supporters who are on the official club excursion, ventured into Obertraun village for an evening´s entertainment. Local schnapps was enjoyed while ´volunteers´ were engaged in a ´Play Your Cards Right´ style game. Defensive co-ordinator John Blackley was victorious, and promptly shared his prize of a bottle of the regions finest with everyone. The drive from Argyle´s camp at Obertraun to Schwanenstadt, venue of the three-team tournament, took just over an hour. In blistering heat, it was always going to be a day where ample supplies of water were imperative. Schwanenstadt is known as the Swan City. With a population of 4,200, it may come as a surprise that the football club is well-financed. A local butcher who supplies much of the Upper Austria region is the clubs president  even though he does not have an interest in football.
However, as a local man, he has always been eager to promote anything that is to the benefit of the town, which lies in the midst of rich farmland in a predominantly milk-producing area.

After the tournament, players from all three sides enjoyed a post-match meal at the club while the supporters took advantage of the bar in the clubhouse, the huge beer tent, and the barbecue serving sausages  no doubt with the influence of the club president. The official Argyle party then headed to Salzburg for their night of relaxation during the tour. However, some decided to return to the team camp by taxi which is when language problems took over. Instead of being driven back to Obertraun, one cab driver misinterpreted the destination for Obertrum, a small town north of Salzburg. The meter ticked much longer than anticipated. Sunday seems to be even hotter, which may not be good news for the Argyle fans. Its a day to meet the players before the tables are turned. The Argyle stars will have the opportunity to see the supporters in action at the teamss headquarters. We await the reaction in case one of the fans can find his way to goal. 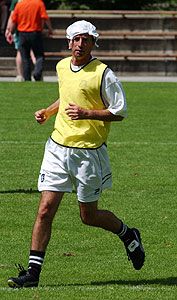 Manager Paul Sturrock was furious with his players after wasting numerous chances on the final match of the Austrian tour against a fourth division local side. Seventeen year-old schoolboy Alfred Fellner was the man of the match, but that was no excuse as far as the Pilgrims' boss was concerned. "When I was a player, if I was told to do A, B, C and D, I made sure I did it." Nathan Lowndes was guilty of spurning most of the chances as Argyle dominated the first 56 minutes. The Austrians broke away with Christian Stangl applying the final touch to a right-wing cross to give the hosts a surprise lead. The equaliser came nine minutes later when Lowndes and David Beresford both ran free, but both in offside positions which were ignored by the officials. Lowndes supplied Beresford for what should have been an easy chance, but the midfielder needed two attempts to finish after his first shot was deflected by a retreating defender. "Their only excuse was the pitch was only 65 yards wide," said Sturrock, who finally emerged from the dressing room 45 minutes after the final whistle. "We played a team that near enough played a 3-6-1 system. Naivety was shown by certain players and they missed too many chances by far. Some players have not risen to the challenge." The Argyle boss added that lessons must be learned: "Certain players know what the story is, and they know what they need to do. It's going to be a long season, but the week will show its benefits as the season goes on."

Greens on Screen is run as a service to fellow supporters, in all good faith, without commercial or private gain.  I have no wish to abuse copyright regulations and apologise unreservedly if this occurs. If you own any of the material used on this site, and object to its inclusion, please get in touch using the 'Contact Us' button at the top of each page. Search facility powered by JRank Search Engine. Hover facility courtesy of Milonic. UK time at page load: 09 May 2021, 10:50.