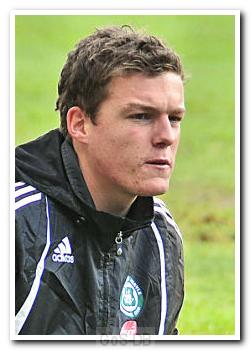 Born in Perth, Australia, Lowry started his career at ECU Joondalup and moved to Aston Villa in 2005. He made only three substitute appearances in his first four years at Villa, before joining Argyle on a three-month loan at 20 years old. He greatly impressed at centre-back during his short stay at Home Park and his loan may have been extended but for an injury crisis at Villa. A month after returning to Villa Park he joined Leeds United on loan, then briefly returned to Villa and then back to Elland Road where he helped the club achieve promotion to the Championship. Lowry played for the Republic of Ireland at youth and under-21 level but chose to play for Australia as a full international, with one eye on the FIFA 2010 World Cup. Despite being named in several Australia squads, he did not make any appearances for the national team and was omitted from the final World Cup squad.

In January 2011 Lowry joined Championship side Sheffield United on loan, playing 17 games but he was unable to help them avoid relegation. In November 2011 he was then loaned out to Millwall, and in the following January transfer window the deal was converted to a 2½-year contract. He made a total of 82 appearances for the south London side but his contract was not renewed when it came to an end in May 2014. Two months later he signed on a two-year deal with Leyton Orient.

Lowry started 36 games in all competitions for Orient in the 2014-15 season but then exercised a right in his contract to leave the club. After a trial with Birmingham City in the 2015-16 pre-season programme, his move to City was confirmed at the end of August 2015. After struggling to get games at City, Lowry completed a move back to Australia in January 2016 to his home town A-League team, Perth Glory.