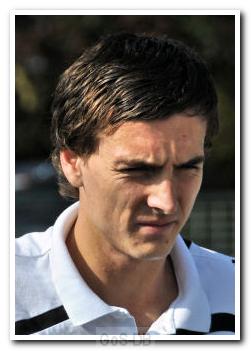 Gow started his career at his hometown club, Clydebank, moving on to Airdrie when Clydebank went out of business in 2002. An impressive goalscoring record there led to a move to the SPL with Falkirk in the summer of 2005 and his continued good form saw him join Rangers two years later. He also received a call-up to the Scotland B team. However, apart from one cup game he could not break into the first team at Ibrox and after loan spells with Blackpool and Norwich City, he joined Argyle in a £200,000 transfer in August 2009.

Despite scoring in each of his first two appearances in green, Gow soon found himself out of the first team reckoning and returned to Scotland on a loan deal with Hibernian at the end of the January 2010 transfer window. In the April he made it clear that he did not wish to return to Home Park, even though a further year remained on his contract and Hibs did not want to extend his loan. He returned at the end of the season and in July a settlement was reached to allow him to leave the club.

In August 2010 Gow had an unsuccessful trial with Russian Premier League outfit Krylia Sovetov, and by the end of the month a likely deal with Swindon Town fell through after a reported dispute over terms. In early September he signed for Motherwell but his time back in Scotland was short-lived. After two goals in 17 games at Fir Park he was released in the January transfer window and moved south again to join Notts County until the end of the season, scoring a single goal in 18 games.

A free agent again, Gow decided on a surprise move to Indian Premier League side East Bengal in August 2011, under their English manager Trevor Morgan, where he played five times and scored twice. He was released in January 2012 and then entered into contract negotiations with Iranian Premier League side Rah Aha, but a move did not materialise.

In March 2012 Gow arrived at a somewhat less exotic location, by returning to the Westcounty to sign for Exeter City. He scored 14 times in 63 games over two years at St James Park, as well as four games in a loan spell at Bristol Rovers in February 2014, which was curtailed after he suffered knee ligament damage.

Having recovered from his injury, Gow signed for St. Mirren in February 2015 until the end of season.