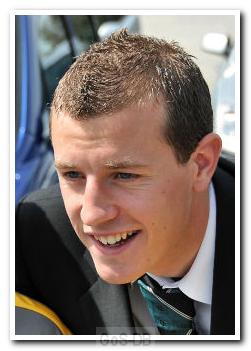 Luke, son of former Argyle midfielder and assistant manager Kevin Summerfield, came through the Argyle youth system, having joined the Centre of Excellence at the age of ten. He was a consistent performer in the reserve side as well as the under-18s and, after forcing his way into the first team squad, made his debut at the end of 2004-05.

After signing a two-year professional contract, Summerfield celebrated his first start by scoring the winning goal at Colchester United. He joined AFC Bournemouth on loan in March 2007 to gain more first team experience but after returning, struggled to break into the team throughout the following season. At the start of 2008-09 he enjoyed a long run in the team before losing his place towards the end of the campaign and was again on the sidelines at the start of the next season.

Summerfield then spent three months on loan at Leyton Orient, returning to Home Park in December 2009 at which point he enjoyed a brief return to the first team. Beginning the 2010-11 campaign in the starting XI, 'Summers' suffered two serious knee injuries which saw him miss most of the season, at the end of which his contract expired and he was released.

In July 2011 and still only 23, Summerfield had a trial with his hometown team, Shrewsbury Town (his father's final club as a player), and played in a friendly against Manchester United. However, he was not offered terms and signed the following month for Cheltenham Town on a one-year deal. He became one of the driving forces as Town headed for the play-offs that season, making 41 appearances scoring 4 goals, and played in the 2012 Play-off Final defeat by Crewe Alexandra at Wembley, which turned out to be his last appearance for the Gloucestershire club.

Summerfield went on to achieve promotion by other means: rejecting League Two Cheltenhams offer of another contract and almost a year after his initial trial with them, he signed for League One Shrewsbury Town in July 2012. Joining his home side was an odd twist of fate; 16 years earlier Luke had been the Shrews mascot in the 1995-96 Football League Trophy Final against Rotherham United at the old Wembley Stadium, during his Dad's time at the club. Not many can boast of being both mascot and player for their birthplace team.

After four goals in 70 appearances for Shrewsbury, he moved on to League Two York City on a two-year contract in June 2014. In all he made a total of 69 appearances and scored twelve goals for the Minstermen before declining a new contract in May 2016 following their relegation from the Football League. A month later he signed a two-year deal with newly-promoted Grimsby Town - ironically one of the clubs that replaced York back in the Football League. Having made 27 appearances and scored twice in his first season at Grimsby, he was loaned to Macclesfield Town in February 2017, with a clause for the deal to become permanent should the Silkmen win promotion back to the Football League.

After three months with Macclesfield, including a late substitute appearance in the FA Trophy Final at Wembley against his former club, York City, Summerfield returned to Grimsby for the 2017-18 season.

Greens on Screen is run as a service to fellow supporters, in all good faith, without commercial or private gain.  I have no wish to abuse copyright regulations and apologise unreservedly if this occurs. If you own any of the material used on this site, and object to its inclusion, please get in touch using the 'Contact Us' button at the top of each page. Search facility powered by JRank Search Engine. Hover facility courtesy of Milonic. UK time at page load: 23 April 2021, 03:30.