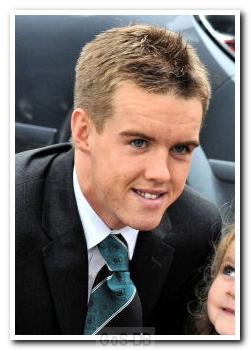 Came from: Southport   Went to: Brighton and Hove Albion

Noone began in the apprentice ranks at Wrexham, but was rejected as too light. Accepted by Skelmersdale United, he rose up from the youth side to the first team in his two years with the club, and then moved on to Burscough for a season before joining Southport. By this time he was a roofer by trade but attracting interest from several League clubs, and after only one game for Southport, agreed to join Argyle in August 2008.

He was mainly used as a substitute in his first two years at Home Park, slowly building a reputation as a potential game-changer when coming off the bench. After a successful six weeks on loan at Exeter City in 2009, he gradually established himself in Argyle's first team, showing glimpses of excellence as an exciting flair player. However, with the spectre of administration looming over the club, Noone was allowed to join Brighton and Hove Albion for an undoubtedly artificially low undisclosed fee on the first day of 2011.

As at Home Park, he became a fans favourite at Brighton, alongside another former Pilgrim, Ashley Barnes, and helped the club rise from League One to the Championship, and from the confines of the Withdean Stadium to its impressive new Amex Stadium home. Having had a £500,000 bid from Cardiff City rejected, Noone signed a contract extension in March 2012 to keep him at the Amex until June 2015. However, the Welsh side returned and doubled their offer and Noone eventually moved to Cardiff in August 2012 on a four-year contract for a fee believed to be in the region of £1 million. But he always maintained a soft spot for the club that gave him his professional debut, and whilst at Brighton, turned up to join the Green Army at an away game against Barnet at Underhill in 2012.

Alf Miller, who joined Argyle in 1939 and became captain on his debut. He was one of the first to get his call up papers for the Army.
Roy Royston, Alf's brother-in-law, and like Alf, he too was called up for the Army. He captained the team after the war at the end of the 1946-47 season.
George Silk, a dependable right-back who captained Argyle when in the wartime S.W. Regional League.
Fred Molyneux, a big centre-half who was made captain by Billy Bingham.

I saw Craig Noone in the lounge at Home Park and told him that as an ex-Southport outfield player, to emulate former players from Southport, he would need to be the captain of Argyle one day. I was surprised when such a young player was made captain only a few weeks after I spoke to him, and delighted too - it was a good experience for him and it kept the Southport to Argyle captain pattern going.