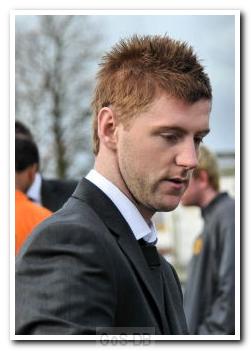 The Glasgow-born forward worked his way up from Blackburn Rovers' academy to its first team squad, making his senior debut against Arsenal in the Premiership in August 2003. At 19 years old he added to his under-21 honours a year later by winning his first and only full international cap for Scotland, after just 16 games for his club.

Over the next three years he spent lengthy loan periods at Stoke City and Preston North End before joining Argyle in August 2008 on a season-long loan, finishing the campaign as the Pilgrims' leading goalscorer. A versatile forward who often played on the wing for Argyle, he signed for Leicester City on a three-year deal after leaving Blackburn in August 2009.

In 2011 Gallagher signed a contract extension at Leicester to keep with the Foxes until the summer of 2015. In September 2012 he began a one-month loan spell with Sheffield United, but despite a desire to extend the deal, he returned to his parent club for the rest of the season. In October 2013 he began a loan with Preston North End for the rest of the season, scoring ten times in 35 games before a second agreement was reached in July 2014, this time for a full-season loan at Deepdale.