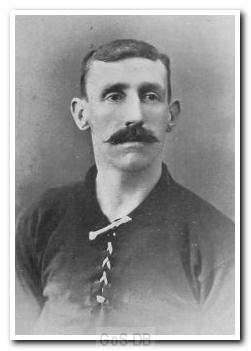 Born in 1873, Wright was a talented inside-forward who played for hometown club Hamilton Academical in their early days before being admitted to the Scottish League. He also represented Lanarkshire against East of Scotland, scoring in a 3-2 defeat at Airdrie in January 1892, and played some games for nearby Motherwell at the close of the 1893-94 season after a falling out with Accies.

He then moved to Clyde before heading south to join Bolton Wanderers in 1895. In three years at Burnden Park he made 85 appearances, many of them alongside Bob Jack, and scored 14 goals. He moved to Sheffield Wednesday in 1898 and scored 41 goals in 103 appearances and three seasons before returning briefly to Hamilton (without adding any further appearances) and then to Bolton again for the 1903-04 campaign.

In May 1904 he signed for Argyle and was a fixture in the first team for the following three years. The 1905-06 handbook states that he was "always clever, frequently brilliant, and has never been known to play a bad game". Wright left Argyle in the summer of 1907, having made over a century of appearances for the club, and ended his career with a season at Watford and two years at his final club, Southend United. He was employed by Southend Corporation Tramways and Electric Department and continued his link with the game by taking charge of Southend's reserve side in 1913. His son John (b.1917) later played for Hamilton too.

When Bob Jack, Argyle's legendary manager, died in May 1943, Jocky Wright - his teammate at Bolton and Argyle, and subsequent lifelong friend - was at his bedside.

Greens on Screen is run as a service to fellow supporters, in all good faith, without commercial or private gain.  I have no wish to abuse copyright regulations and apologise unreservedly if this occurs. If you own any of the material used on this site, and object to its inclusion, please get in touch using the 'Contact Us' button at the top of each page. Search facility powered by JRank Search Engine. Hover facility courtesy of Milonic. UK time at page load: 18 May 2021, 09:03.