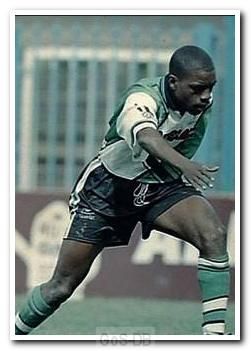 Williams was a popular left-back who arrived at Home Park in the summer of 1995 as part of Neil Warnock's post-relegation recruitment drive. Having started his career at Stockport County, he joined Premier League club Coventry City in 1993 but couldn't force his way into the first team and was persuaded to drop four divisions by Warnock. 'Charlie' was an ever present as Argyle won promotion through the playoffs in his first season at the club, endearing himself to the club's fans for evermore by scoring a diving header in the dying seconds of the semi-final against Colchester United at Home Park to send Argyle to Wembley.

He was an energetic presence on the left side of Argyle's defence for the next two seasons, but relegation back into the fourth tier in 1998 was an unacceptable career development for the pocket-sized defender and he left to join Gillingham. After making a handful of appearances for The Gills, Williams joined Bury - his last Football League club - before seeing out his playing days with Leigh RMI.