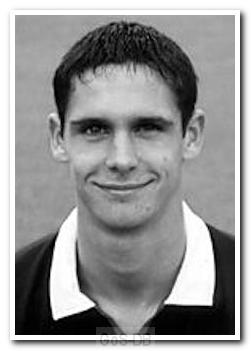 Came from: Dundee   Went to: Dundee

Wilkie started his career as a trainee with Dundee and spent 8 years with the club, making only about 130 appearances due to a series of injury problems. In 2001 he joined Argyle on loan with a view to a permanent deal but the move was cut short by injury and the transfer fell through. He also had loan spells with Notts County and Falkirk during his time at Dens Park and played for Scotland. Wilkie suffered serious knee ligament injuries in 2004 and 2005, which ultimately led to his release by Dundee. He then joined Dundee United, initially on a pay-as-you-play contract whilst he proved his fitness. After a short loan period with Ross County to improve his match fitness, he returned to Tannadice and slowly regained his form and fitness, going on to be named team captain.

Greens on Screen is run as a service to fellow supporters, in all good faith, without commercial or private gain.  I have no wish to abuse copyright regulations and apologise unreservedly if this occurs. If you own any of the material used on this site, and object to its inclusion, please get in touch using the 'Contact Us' button at the top of each page. Search facility powered by JRank Search Engine.Milonic UK time at page load: 19 January 2021, 15:15.