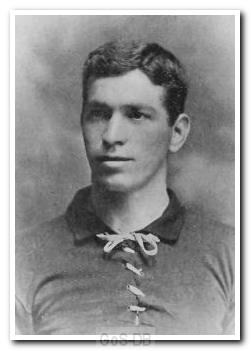 Records often show Warburton as being born in Sharples, Lancashire in 1880. The unearthing of his precise date of birth, however, confirmed that his birth-place registration was Little Bolton, then part of Salford in south-west Lancashire. (Historically, Little Bolton had three detached parts which were separated by the areas of Lower Sharples and Higher Sharples.)

Warburton began his career with Turton and was also a very competent cricketer, playing for Turton Cricket Club. After beginning an apprenticeship as a stonemason, following in his father's footsteps, he decided to leave the trade and pursue a career in football. He managed to get an apprenticeship with Bolton Wanderers and progressed to make a single first team appearance.

After a spell with non-league Bryn Central, he spent two seasons with Bury, scoring 5 goals in 11 appearances, before joining Swindon Town in 1907. In his only season with Swindon he scored 11 times in 27 games. Moving to Home Park in the summer of 1908, Warburton was described by the club handbook as "a big fellow  has plenty of dash and takes any amount of stopping". Despite being a regular first teamer at inside-forward he chose to leave at the end of the 1908-09 campaign, returning to the North East with Accrington Stanley.

Warburton went on to play for Morecambe before returning to the building trade, but was then persuaded by a friend to try his luck as a football trainer in the Netherlands. He worked for a year with Amsterdamsche FC, before moving on to Hercules Utrecht. His next job was with HVV Den Haag, a position he held until the mid-1930s, combining the post with that of the Netherlands' national team coach between 1919 and 1923. In 1920 he led the Netherlands to a bronze medal at the Summer Olympics in Antwerp. Returning to England in 1935, following a tax dispute with the Dutch authorities, he again became involved with Morecambe FC, lending his experience to the club until his death in 1948. Two of his sons, Joe and George, also became professional footballers.