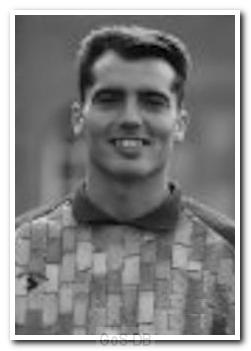 Signed by Kevin Hodges in the summer of 1999 as cover for first-choice keeper Jon Sheffield, Hackney-born Veysey had enjoyed a circuitous career that had started out at his local club Tottenham Hostpur and later taken in spells with both Torquay United and Exeter City.

His life in football began as a schoolboy at Spurs but was accepted as an apprentice at Arsenal and also, whilst still a youth, had a brief spell at Fulham. He then moved into London non-league football, briefly playing for Leyton FC, before following his family to South Devon where he joined Dawlish Town. In 1987, still only 20, he was signed by Torquay United and went on to play 72 times for the Gulls before a £110,000 transfer to Oxford United in 1990, for whom he made 57 league appearances. He spent nearly three years at the old Manor Ground before moving on to Reading and then Exeter City midway through the 1993-94 season, clocking up 12 league appearances before dropping out of League football in the summer of 1994 and eventually signing a part-time contract with Dorchester Town, although he continued to train at Torquay.

In August 1997 Veysey was released by Dorchester after turning down a reduced contract and instead accepted an offer by then Gulls' manager Kevin Hodges to rejoin Torquay, where he added another 37 to his total. A year later Hodges took over the Home Park hot-seat and in the summer of 1999 he brought Veysey to Home Park to complete a hat-trick of Devon clubs. As cover for Jon Sheffield he made nine appearances for the Pilgrims before being released by Paul Sturrock at the end of his one-year contract.

Veysey then joined Taunton Town during the 2000 close-season, but his appearances were restricted by a back injury and in October 2000 he was appointed goalkeeping coach at Torquay. Combining his coaching at Plainmoor with running a local golf equipment shop and then working as a postman, he left Torquay again but in June 2007 again became United's coach. Despite Torquay's drop from the Football League in 2014 he maintained a coaching role alongside two other former Argyle men, Lee Hodges and Chris Hargreaves.

However, in June 2015, following the takeover of Torquay by a new consortium, Hodges, Hargreaves, and Veysey were placed on 'gardening leave' after turning down a significant pay cut. Their exits from the club were confirmed just two days later.

Greens on Screen is run as a service to fellow supporters, in all good faith, without commercial or private gain.  I have no wish to abuse copyright regulations and apologise unreservedly if this occurs. If you own any of the material used on this site, and object to its inclusion, please get in touch using the 'Contact Us' button at the top of each page. Search facility powered by JRank Search Engine.Milonic UK time at page load: 16 January 2021, 20:20.