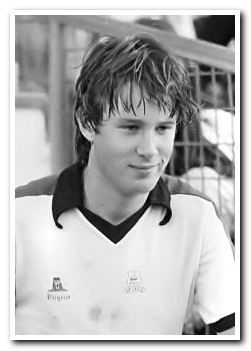 Born in Northolt, the powerfully-built forward had schoolboy trials with Chelsea before family relocation saw him playing local youth football in Somerset, where he was spotted by Argyle and given an apprenticeship before turning professional in 1977. Trusson was given his first team chance by Tony Waiters, making his debut for the Greens at the age of 17, and despite his debut season ending in the club's relegation, he went on to become a regular over the following years. Having seen Waiters depart and then remain at the club throughout the managerial changes of Mike Kelly, Lennie Lawrence and Malcolm Allison, he departed Home Park in the summer of 1980  with Bobby Saxton at the helm  for Third Division rivals Sheffield United. The fickle hand of fate then played its part as, like at Argyle, his first season with The Blades ended in relegation, this time to the fourth tier.

After three years at Bramall Lane, playing 126 times, scoring 31 goals and helping United bounce back, Trusson then made the short move to neighbours Rotherham United, where he remained for four years, playing 124 times and scoring 19 goals. In 1987 he moved south to join Brighton and Hove Albion, helping the Third Division club to promotion with 37 appearances. He then moved to play three injury-plagued seasons with Gillingham before spending the 1991-92 season with Hong Kong club Sing Tao Sports Club. He returned to England to sign for Tony Pulis' AFC Bournemouth, and although he made no League appearances for The Cherries, he became youth team coach and for a period coached the first team.

On leaving Dean Court he saw out his playing career with renowned Sussex non-league club STAMCO between 1994-96. This was the works team of Sussex Turnery and Moulding Company who rose 14 divisions in 26 years before becoming St Leonard's FC and sadly, ultimately folded in 2003. After retiring from the game, he held a variety of posts including marketing manager for a football-themed restaurant in London, a marketing position for the Professional Footballers' Association (PFA) and also rather less obviously, as sponsorship manager for the World Snooker Association. In 2000 he was appointed Chief Scout for Premier League club Portsmouth.