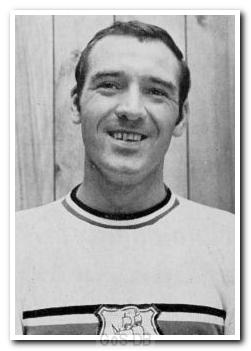 Came from: Crusaders   Went to: Waterford

Trainor was a prolific goalscorer in Irish football, where he started his career with Lisburn Distillery before moving on to Coleraine. He then spent five years with Belfast Crusaders where his reputation brought him to the attention of Argyle and won him international honours. During this period he also played as a guest for the Detroit Cougars, a team that was actually Glentoran FC playing under a different name in a specially arranged American summer league. Signing for Argyle in 1968, he made an immediate impact with his unusually long throws, a novel part of the game at that time, but soon struggled to make much of an impression and returned to Ireland within six months, joining Waterford. Two years later he was playing for St Patricks Athletic and then moved to his final club Drogheda United. In August 1974, whilst travelling back from a pre-season training camp, Trainor was tragically killed in a car crash.