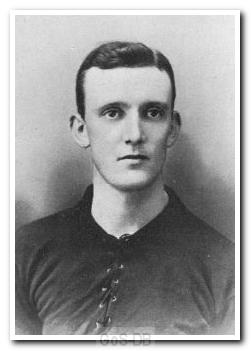 Came from: Bury   Went to: Southampton

Thorpe was born in Hayfield, Derbyshire in 1879. He began his career in 1897 with Stalybridge Rovers, briefly moving on to Newton Heath (soon to become Manchester United) in 1900, before signing for Bury in 1901. He spent six years at Gigg Lane, playing 180 games at centre-half and helping the team win the FA Cup in 1903. Thorpe played in every Cup fixture that season as Bury set a record by winning the competition without conceding a goal, culminating in a 6-0 victory over Derby County in the final.

After losing his place in the team during the 1905/06 season, Thorpe moved to Home Park in the summer of 1906. He was described by the club handbook as having "fine judgement, an excellent shot and knows where to place the ball". His performances lived up to his billing but, owing to the club's financial difficulties, he was released in March 1907 and joined Southampton. At the start of the following campaign he was named as Saint's captain and led his team to an FA Cup semi-final. An injury saw Thorpe miss three months of the 1908/09 season, at the end of which he left The Dell having scored five times in 65 games for the club. He returned to Bury to finish his career as player-coach.