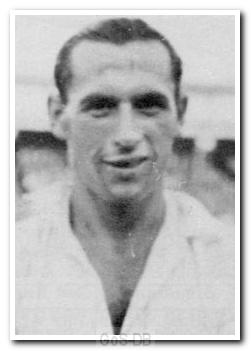 Came from: Brentford   Went to: Fulham

Born in Stepney in London's East End, Thomas was a prolific centre-forward throughout his career. He started out in non-league football with Golders Green and Hendon before moving to Brentford during the Second World War, where he played regularly during the conflict as well as guesting for West Ham United. He signed for Argyle at the back-end of the 1945-46 season, joining his older brother Dave, who had been Jack Tresadern's first signing eight years before. Both brothers were exciting and free-scoring forwards who notched up 36 goals between them in the first season of the re-established Second Division, with Bob showing glimpses of excellence at inside-forward.

However, Bob Thomas never fully settled in the city, not helped by a lack of housing, which was a significant issue for post-war Plymouth. Leaving Home Park in 1947, he not surprisingly signed for a club in the capital, embarking on a successful spell with Fulham, where he played 167 times and scored 55 goals in four years and helped The Cottagers win the 1949 Second Division championship. Moving across London, he then signed for Crystal Palace in 1952, where he played 96 times and notched up another 31 goals before winding down with non-league Kettering Town.

In the late 1960s I was recruited to play for the Financial Times in the London Business Houses league, which had a sprinkling of retired professionals playing. One in our team was Bob Thomas, who only now I realise was 50/51 years old! I was recruited as a centre forward, but was really a centre half. I had scored in every game till December, when the regular centre half was injured and I played there ever more. Bob knew I was keen to keep my scoring record going, and when he was taking a corner, told me where to stand. I could have shut my eyes and scored. It landed bang on my head and was an easy nod in. Thank you for that Bob. His son Bruce also played.

RIP Bob. Never realised quite how old you were but remember you as a true gent.

Greens on Screen is run as a service to fellow supporters, in all good faith, without commercial or private gain.  I have no wish to abuse copyright regulations and apologise unreservedly if this occurs. If you own any of the material used on this site, and object to its inclusion, please get in touch using the 'Contact Us' button at the top of each page. Search facility powered by JRank Search Engine.Milonic UK time at page load: 22 January 2021, 19:46.