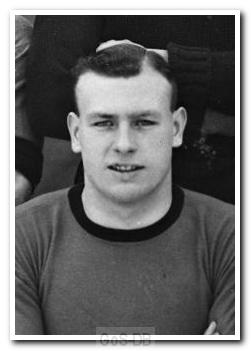 1. Came from: Romford   Went to: Career interrupted by WW2

2. Came from: Career interrupted by WW2   Went to: Watford

Born in Stepney, Thomas was a prolific centre-forward throughout his career which started locally with non-league Romford. He was Jack Tresadern's first signing, to replace Old Trafford-bound Bill Hullett, and he chalked up 23 appearances before the Second World War interrupted his Football League career. He continued to play in the 1939-40 South West Regional League and 1945-46 Football League South, and then resumed his Football League career with a highly prolific 1946-47 campaign. Maurice Tadman's arrival in the summer of 1947 limited his chances the following season and he left Home Park early in 1948, having played exactly a century of games and scoring an impressive 44 goals. He then spent three years with Watford, playing 105 times and scoring 41 goals before moving to Gillingham in 1950 where he still hit the net with even more regularity, scoring 42 in just 80 games, before retiring and winding down with non-league Sittingbourne.

His brother Bob  also a free-scoring forward  played for Argyle at the end of the Football League South season and was a virtual ever-present in the 1946-47 campaign alongside Dave, the brothers scoring 36 goals in that one season.

Greens on Screen is run as a service to fellow supporters, in all good faith, without commercial or private gain.  I have no wish to abuse copyright regulations and apologise unreservedly if this occurs. If you own any of the material used on this site, and object to its inclusion, please get in touch using the 'Contact Us' button at the top of each page. Search facility powered by JRank Search Engine.Milonic UK time at page load: 22 January 2021, 13:02.