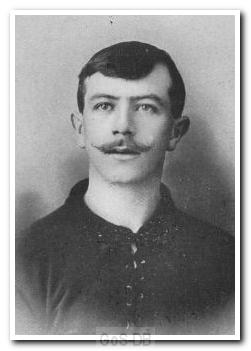 Swann was born in Lytham in 1881 and began his career in his hometown with Lytham Institute. A centre-forward, he joined Bury in 1903 and scored 11 goals in 40 games over his three seasons with the club. In 1906 he moved to Home Park and made a stunning start to his Argyle career, scoring all five goals in a 5-0 Western League victory over Millwall, in just his third game. The Argyle handbook describes him as "a little 'un, very good and nippy and finishes well under all conditions". He proved this again by scoring in six consecutives games mid-way through the season, but despite this, he left the club before the end of the campaign, primarily due to financial problems at Home Park. He signed for Crystal Palace in April 1907 and also went on to play for Queens Park Rangers.

Greens on Screen is run as a service to fellow supporters, in all good faith, without commercial or private gain.  I have no wish to abuse copyright regulations and apologise unreservedly if this occurs. If you own any of the material used on this site, and object to its inclusion, please get in touch using the 'Contact Us' button at the top of each page. Search facility powered by JRank Search Engine.Milonic UK time at page load: 24 January 2021, 05:56.