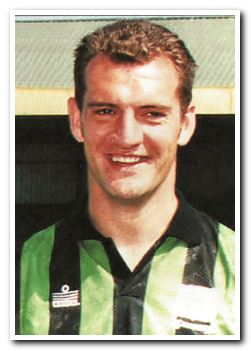 Signed from Port Vale for a club record £300,000 in the summer of 1994, Swan was supposedly the final piece in the jigsaw that would convert playoff failure into certain promotion for manager Peter Shilton and his charges. But Swan courted controversy from the off and went on to alienate team-mates and fans alike in a disastrous 13 months in Devon.

Awarded the captaincy that had been controversially stripped from the transfer-seeking Steve Castle, Swan's brash ways split the squad ahead of a 1994-95 campaign that was widely tipped to deliver great success to PL2.

Despite opening the scoring in the season opener at home to Brentford, Swan's debut set the tone for a season that would go down as arguably the worst in the club's history. The shocking 5-1 defeat to the Bees, and subsequent dire results in a record-breaking start to the campaign for the sorry Pilgrims, drove a permanent wedge between the big Yorkshireman and his team-mates. An unsavoury confrontation at the players' Christmas party, meanwhile, led to Swan publicly revealing his hatred of the club and the city in the local media, and his unpopular status among the club's fans was sealed.

Swan's form eventually improved enough to be voted an unlikely third in the club's player-of-the-year awards, but not enough to help haul the club out of the drop zone. Relegation to the fourth tier of English football for the first time in the club's history was a fitting farewell for a player whose name has become synonymous with failure at Home Park.