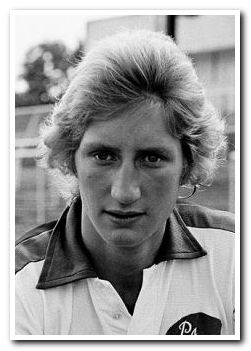 Sutton was born in Tarleton, near Preston, but served his apprenticeship with Argyle after being overlooked by northern clubs. As a raw 17-year-old, the central defender was given his first team chance by Tony Waiters in the last two games of the 1973-74 season, but hopes of a breakthrough were premature as he only made two further appearances the following season. His time came in the next two campaigns, clocking up over a half a century of appearances with Argyle in the Second Division. However, with Argyle relegated and Waiters replaced by Mike Kelly, Sutton's fifth season at Home Park started on the sidelines and at still only 20, he was loaned to Reading. Deciding his future laid elsewhere and without adding to his appearances in green, he was transferred to Huddersfield Town in March 1978, in what proved to be a seminal career move.

Making 242 appearances and scoring 11 goals in a six-year stay, Sutton was part of Mick Buxton's successful Terriers side that rose from the Fourth Division to the upper echelons of the Second. After leaving the West Yorkshire side, he moved to Third Division Bolton Wanderers where he made 98 appearances in a four-season stay, experiencing relegation but also promotion via the play-offs in 1987-88. On his release from Burnden Park, he moved the short distance to Rochdale where he was made skipper by Danny Bergara but, after only 28 appearances, was advised to give up the full-time game or risk long-term damage because of back problems. Bergara retained his services as club physio, which ultimately led to him becoming caretaker manager for three matches between Bergara's departure and Terry Dolan's appointment. When Dolan then moved to Hull City, Sutton declined the chance to join him, becoming caretaker manager again before being finally given the chance permanently during the summer. He was in charge at Spotland from 1991 to 1994 and narrowly missed the play-offs twice.

He left by mutual consent in November 1994 after several heavy defeats, and then took charge of Chorley for 18 months before resigning to concentrate on the market gardening business he ran with his father.

Greens on Screen is run as a service to fellow supporters, in all good faith, without commercial or private gain.  I have no wish to abuse copyright regulations and apologise unreservedly if this occurs. If you own any of the material used on this site, and object to its inclusion, please get in touch using the 'Contact Us' button at the top of each page. Search facility powered by JRank Search Engine.Milonic UK time at page load: 21 January 2021, 07:13.