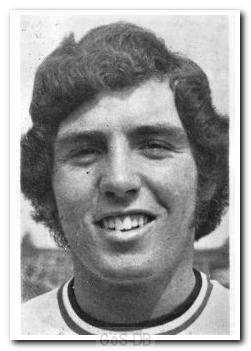 Saltash-born Sullivan was just 16 when he made his Argyle debut in 1968, a year before signing professional forms. He soon established himself as first choice left-back and won caps at England youth and under-23 level. Sullivan was snapped up by Norwich City in 1974 and made over 150 appearances for the club. A two-year stint with Cardiff City followed and then, after a brief period with Hereford United, he moved on to Portsmouth. He stayed at Fratton Park for three years, helping the club win Division Three in 1982-83, before moving on to Swansea City, where he ended his professional career.

Colin Sullivan was 16 years, eight months and 23 days old when he made his League debut for Argyle in March 1968, (then) the youngest player to have played for the club in League football. The Saltash-born full-back made the leap that season from Western League football to the Football Combination and then on to Division Two. He went on to make 11 League appearances that season and did not sign full-time professional forms until the close season. Even allowing for the fact that the 1967-8 season saw Argyles relegation from the Second Division and a large amount of turbulence in team selection, Sullivans selection was achieved on merit.

After one more season of consolidation at left-back, he established himself as a virtually automatic choice and was honoured by England at Youth level in 1969. He won two Under-23 caps in 1974 when he was also a key member of the side which got as far as the semi-final of the League Cup.

His showing in that competition against some of the leading forwards in the First Division convinced Norwich City that he would be an asset and he played in their League Cup Final side in his first season with the East Anglian club. Having made such an early start, Colin Sullivan was on the League scene for some 20 years and had spells with Cardiff City, Hereford United, Portsmouth and Swansea City.

Greens on Screen is run as a service to fellow supporters, in all good faith, without commercial or private gain.  I have no wish to abuse copyright regulations and apologise unreservedly if this occurs. If you own any of the material used on this site, and object to its inclusion, please get in touch using the 'Contact Us' button at the top of each page. Search facility powered by JRank Search Engine.Milonic UK time at page load: 18 January 2021, 16:59.