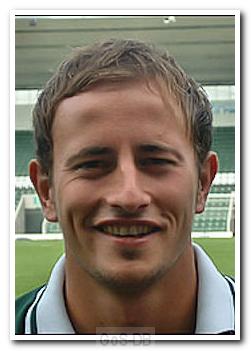 Beginning his career as a trainee at Dundee United under his father Paul, Sturrock did not make a first team appearance for the club and had a brief loan spell with Brechin City before being released. After moving to Home Park to link up again with his Dad, he was a regular member of the first team squad over the next four years but made the vast majority of his appearances as a substitute. Given a free transfer by Argyle he moved on to Kidderminster Harriers and at the end of his contract joined Rochdale. He had a fairly successful start to his time there but suffered a knee injury which saw him lose his place in the team and eventually led to his release. Sturrock then joined Swindon Town, initially for assistance in recovering from his injury, but did enough to earn a short-term contract from Sturrock senior. This contract was soon extended but he could not win a regular place in the team after his father returned to Argyle and he had loan spells with Bournemouth and Torquay United before being released and signing for Mansfield Town.

Greens on Screen is run as a service to fellow supporters, in all good faith, without commercial or private gain.  I have no wish to abuse copyright regulations and apologise unreservedly if this occurs. If you own any of the material used on this site, and object to its inclusion, please get in touch using the 'Contact Us' button at the top of each page. Search facility powered by JRank Search Engine.Milonic UK time at page load: 21 January 2021, 07:26.