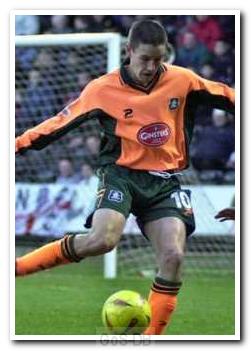 'Stoney' began his career as a trainee with Tottenham Hotspur, joining Argyle on a free transfer after failing to break into the first team squad at White Hart Lane. He made an immediate impact at Home Park, despite his age, and his form led to an England under-18 international call-up. He was the club's top scorer in 2000-01, his second season, and played a vital role in the Division Three title win a year later.

Stonebridge also played an important part in the following two campaigns, culminating in the Division Two championship. Despite the success, he was allowed to leave on a free transfer when Argyle were promoted and moved to Wycombe Wanderers. He was a regular in the team during his first season at Wycombe, but moved to Torquay United on loan after losing his place the following year. This loan spell was cut short due to injury and he struggled to regain full fitness over the next 18 months, eventually being forced to retire at just 25. He went on to play briefly for non-league Truro City.

Greens on Screen is run as a service to fellow supporters, in all good faith, without commercial or private gain.  I have no wish to abuse copyright regulations and apologise unreservedly if this occurs. If you own any of the material used on this site, and object to its inclusion, please get in touch using the 'Contact Us' button at the top of each page. Search facility powered by JRank Search Engine.Milonic UK time at page load: 16 January 2021, 21:56.