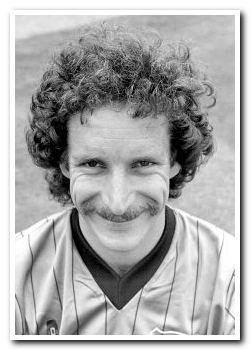 Tommy Tynan's strike partner in the 1984 run to the FA Cup Semi-Final, Staniforth joined Argyle from Carlisle United. Arguably, his most famous moment came during that Cup run when he hit both posts with a searing effort in the draw with Derby County at Home Park. He had begun his career with hometown club Hull City, but when he could not win a regular place in the team moved on to York City. His goalscoring record there led to his transfer to Carlisle and despite being a key part of the team, he was allowed to move to Argyle following a change of manager. Staniforth was voted Argyle's Player of the Year in 1983-84 but when his contract expired at the end of the following season, he rejected the club's offer and was sold to Newport County. Two years later he returned to York City where he ended his professional career, going on to play for North Ferriby United.

Greens on Screen is run as a service to fellow supporters, in all good faith, without commercial or private gain.  I have no wish to abuse copyright regulations and apologise unreservedly if this occurs. If you own any of the material used on this site, and object to its inclusion, please get in touch using the 'Contact Us' button at the top of each page. Search facility powered by JRank Search Engine.Milonic UK time at page load: 18 January 2021, 17:44.