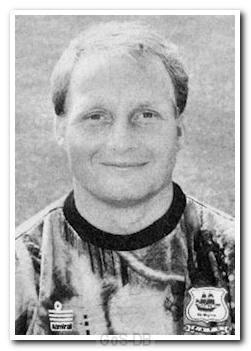 Signed as a player-coach and 36 years old at the time, Blackwell's registration as a player was expected to be nothing more than a cautionary measure. However, the erratic form of the newly signed Nicky Hammond as the 1995-96 season began with six straight defeats saw Warnock call on the steady pair of hands sat next to him in the dugout. Blackwell made his debut in a 5-0 win at Bury, an auspicious start that sparked a nine-match unbeaten run in the league - with the veteran keeper providing a much-needed calming presence between the posts. Sadly, Blackwell's season was ended by injury in January that season, and he was replaced by Australian loanee Andy Petterson and eventually Steve Cherry.

Blackwell remained at Home Park as Mick Jones' assistant following the sacking of Warnock in February 1997, but made just four more appearances for the club and left when Kevin Hodges was appointed manager in July 1998. He had spells as assistant manager at Bury, Sheffield United and Leeds, before replacing Peter Reid as No.1 at the Elland Road club. He went on to manage Luton Town and Sheffield United.

Greens on Screen is run as a service to fellow supporters, in all good faith, without commercial or private gain.  I have no wish to abuse copyright regulations and apologise unreservedly if this occurs. If you own any of the material used on this site, and object to its inclusion, please get in touch using the 'Contact Us' button at the top of each page. Search facility powered by JRank Search Engine.Milonic UK time at page load: 21 January 2021, 08:10.